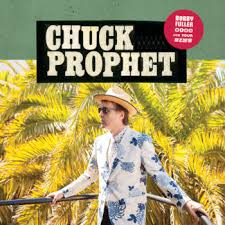 “One Two Three Four,” Chuck chimes in. And we are away! This is his fourteenth album, as always, catching you unawares. The origins of the first, title track explain a lot: One day, sitting in his “office,” South of Market, San Francisco, listening to old records with poet friend, klipschutz, apparently, he picked up his guitar with the words, “I hear that record crackle, the needle skips and jumps,” and klipschutz, spontaneously filled in the rest: “Bobby Fuller died for your sins.”

Maybe you won’t find absolution with this album but it will lead you to ponder what really happened to Bobby Fuller. “I fought the law…”, “Breaking rocks in the hot sun,” he sang in 1966, and soon after, he was dead; his death is still unexplained.

So, this rich album is a colourful, masterful newsflash of contemporary life as it is now and then in the States and everywhere. There are thirteen tracks, all of them of high quality, musically and lyrically, all of them demanding careful attention. Notice, for instance, the musical bridge in “Post War Cinematic Dead Man Blues.” Is that the banging of a post at the beginning and again at the end of the track, there to emphasise the mournfulness? In “We Got Up and Played” the sadness comes obliquely in, through the repetition of the title, the mere allusion to an incident that has taken place, the reference to the bartender “with his pants around his neck,” and just the tone of Chuck’s voice.

Throughout, he is backed by Stephanie Finch (Chuck’s wife) -vocals, organ, guitar; Vicente Rodriguez – Drums; James DePrato – Guitar; and Kevin T. White –bass. As a band they add richness and variety to the whole album.

Dip into the collection wherever you please, there is always something to tantalise you; whether the story is contemporary, personal, media related, thoughtful, sad, or even funny, you will get caught up in the process. “Jesus was a Social Drinker,” a rocking track, with a cowbell at the start, “I’ll tell you what to feel.” “Tell me where it hurts, mama/ Watch me in the water.” The noise of sound (all the band together) and a fade… gets you every time. “If I was Connie Britton” is up-tempo, funny and thought provoking.. “If I was Connie Britton, I’d wear turquoise to the gym/.. I’d have so many clothes…” and there it is: justification for watching “Nashville.” Compare and contrast that with “Alex Nieto.” Just two guitars, a drum and angry, brittle words: “Alex Nieto was a pacifist. / He left for work one day at four fifteen. / He never made it home again.”

Read the article in The Guardian by Rebecca Solnit, “Death by Gentrification. The Killing that shamed San Francisco.” Or what about track four “Coming Out in Code” for its cleverness. Is that a chicken clucking at the start? Of course it is. “A rainbow on a hillside, / A painting in a frame../Baby I’m well travelled/ I’m a poppa; I’m a king.” Here is production of the highest quality, with intricate arrangements. Look! I haven’t mentioned “Bad Year for Rock and Roll” at all, with reference to The Thin White Duke.  Sorry, no space. Suffice it to say: Go and buy what is a very special record.

An important, here and now, album that encapsulates, plainly, the tension that lurks in the modern world between romance and reality.