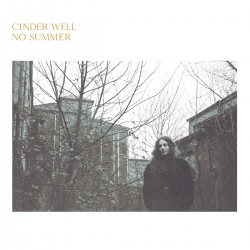 Getting to grips with ‘No Summer’, the distinctive second LP from Cinder Well is a tricky business, especially so if approaching it with little or no experience of the shadowy and complex underground scene from which it emerged. As such it takes time and effort to assimilate the experiences presented here and ultimately, after all this effort, what materialises is a record that can be admired for its commitment, artistry and emotional heft but remains stubbornly difficult to love.

Cinder Well is essentially the “doom-folk” project of Amelia Baker who has a storied musical history of collaborations and networks. Playing squats amongst the anarcho-folk/punk/metal collectives of her native Santa-Cruz, touring Europe with her first band Blackbird Raum and meeting Lankum at a folk-punk festival in Amsterdam, an episode that eventually led to her emigrating to live in County Clare and studying a Masters in Irish Traditional Music Performance at Limerick University. All this is evidence of Baker’s deep feeling for and commitment to the music and the connections it can bring.

Connection is a key theme of the record. Musically linking Baker’s early affinity for the Old Time music of her American home with County Clare’s home-grown ‘Lonesome Touch’ method. Producing music with a meditative, unhurried gate and a stillness at its core; sounding like she has all the time in the world to intuitively mine every note of a song’s genetic code with empathy and compassion.

The sonics of ‘No Summer’ are created by Baker herself on guitar, organ, fiddle and vocals with Marit Schmidt – viola and vocals and Mae Kessler – violin and vocals. Just as importantly though they are shaped by the production of Baker herself and the recording and mixing of Nich Wilbur (Angel Olsen, Mount Eerie, Gun Outfit, Black Belt Eagle Scout).

There is also a third key element to the sound of this record, directly connected to the setting in which it was recorded. The Anacortes studio in Washington is an ex-Catholic church with a heritage of producing music that is richly textured and thick with emotion – it could be called a kind of slow-core sanctuary if that wasn’t too 90’s in emphasis.

The term soundscape is often used in a clumsy fashion when discussing music but in this case it could not be more appropriate. ‘No Summer’ is awash with sounds that express the location in which it was produced, giving it a sonic identity that resonates with a ‘haunting stillness’.  Cinder Well treat their traditional sources in a way that leads to atmospheric, evocative music that remains brittle and fragile, like it is about to crumble away to nothing at any moment.

It might well be slow and thoughtful but there is still dissonance in the music; emanating perhaps from the competing traditions with which Cinder Well are working. The LP attempts to coalesce them in a way that maintains the integrity of each but produces something whole and new. Whilst Baker may have managed this with ‘No Summer’ the pervading impact is of something dank and doom-laden, a monochromatic tone with little light and shade to engage the listener. Either this is atmospheric and profound or oppressive and dull depending on your starting point. It is possible to appreciate the “environment where people can safely feel all the things they need to feel, and have a moment of reflection from the world they live in” that Baker has noted that she wanted to create but ultimately ‘No Summer’ is too close to this second option too often.

This is a real shame because the political, personal and community connections that inform the record are real and eminently supportable. The scene from which Baker comes, which has shaped and nurtured her creative sensibilities, engages folk music as a way to connect people with each other, with their traditions and, explicitly, with radical political philosophies and goals. Baker herself has noted that “It’s important to be an anti-fascist band, because it’s important to be anti-fascist—and for that to be 100% clear”. Amen to that.

Whilst the songs on ‘No Summer’ may not be explicitly political in nature their position is implicit and durable. Baker again clarifying that she approaches her work from a strong female perspective, “critiquing men and marriage, and the struggle and desperation of being a woman”. She has described the traditional song ‘The Cuckoo’, for example, as sending the listener a message to be “wary of men, to be whole, proud, unscathed”.

For all this apparent strength and righteous anger it is difficult to shake the feeling that the record has a residual air of resignation. It seems there is an acquiescence to the slow crumbling of our existence as we understand it, presaged by our losing our connections with what is good and valuable from the past. There is not much of a feeling of hope evident here. The doom-laden portent of regular religious references, metaphorical, allegorical and literal, reinforce this feeling.

‘No Summer’ manages to provoke a confusingly mixed response then. It is dark and affecting whilst at the same time projecting a message of strength and connection. Unquestionably we should be grateful for and supportive of musicians caring enough to take the stance that Baker does here, it is righteous and right-thinking – just plain right. But its musical setting means,  unfortunately, that a rallying cry it is not. It’s songs for the already converted choir, for the campsite or the squat, not the pub or the public hall. Movements need sustenance and ‘No Summer’ sustains and supports its own scene but the opportunity for it to move, energise or even just make the rest of us think is less clear.

Dark and brooding 'Doom-Folk' from County Clare via Santa Cruz