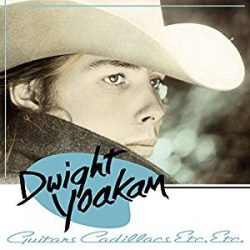 When Dwight Yoakam’s debut album ‘Guitars, Cadillacs, Etc. Etc.’ was released in 1986 it was completely at odds with the prevailing trend in country music towards a soft ‘crossover’ sound. A look at some of country’s best selling records of that year show just how far away from its folk roots country music had strayed. Alabama, Exile, Juice Newton, Anne Murray, Ronnie Millsap and Marie Osmond – all had insipid and diluted down number one records aimed at the wider market. The big record companies were even turning their backs on country legends like George Jones and Merle Haggard, by then seen as too country for mainstream tastes.

Dwight Yoakam was not your typical country music performer. Although born in Kentucky, he moved to Los Angeles in 1977 and was schooled in that city’s punk rock scene, later sharing stages with the likes of other LA acts  The Blasters, X, Los Lobos and Lone Justice. Yoakam successfully moulded together traditional honky-tonk sounds and the Bakersfield Sound of his home state, with the energy and spirit of his punk roots. The result was electrifying. While traditional country instrumentation; fiddle, dobro, pedal steel and flat picked guitar, gave the record its authenticity, it was producer Pete Anderson’s twangy telecaster that provided its signature sound.

In addition to his music, Yoakam himself added to the excitement of the record through his uncompromising attitude, his stage swagger and…. those clothes. His trademark cowboy hat defiantly asserted his country credentials when successful ‘country’ artists of the time were trying to avoid any hillbilly connotations. The sequinned jacket and cowboy boots further nailed Yoakam’s colours to the mast. However, it was his jeans, worn so tight one could only assume that they had been sprayed on, that also defined him. Whilst the rest of his attire emphasised his affiliation to the traditions of country music, those jeans yelled out that he was also young, radical and that country stars could also be sexy. That, even thirty years after Elvis Presley emerged, was quite a jolt to many in the often ultra-conservative world of mainstream country. They preferred their stars to be altogether more wholesome.

The album opens up with ‘Honky Tonk Man’ a cover of the 1956 Johnny Horton classic. This can be seen as Yoakam laying down a marker and encapsulates what the album is about – traditional sounds with a modern burst of energy. Just in case anyone hadn’t got the message, Yoakam also throws in ‘Ring of Fire’ and the Harlan Howard country standard ‘Heartaches By the Number’ first recorded by Ray Price in 1959 but perhaps significantly, also covered in 1961 by Yoakam’s great hero and mentor, fellow Californian Buck Owens.

Some original songs deal with familiar themes such as broken hearts (‘It Won’t Hurt’) and alcohol (‘This Drinkin’ Will Kill Me’). In other songs Yoakam reaffirms country music as the voice of the white rural working class. ‘South of Cincinnati’ deals with rural migration, whilst ‘Miner’s Prayer’ is a dark reflection on life, death and meaning for those forced to earn their living that way. The song was inspired by Yoakam’s grandfather who spent forty years working in mines of Kentucky. ‘Bury Me’, on the other hand, celebrates the state of Kentucky and follows in a long tradition of country songs eulogising about home.

The title track ‘Guitars, Cadillacs‘ can be read as a bitter attack on Nashville. The lyrics seem unequivocal:

Throw in the later line, “There ain’t no glamour in this tinselled town of lost and wasted lives”,  and the case seems closed. However, in their list of the top 100 country songs of all time Rolling Stone suggested that Yoakam’s chorus of “guitars, cadillacs, hillbilly music, is the only thing that keeps me hanging on” indicates that his passion for the music that Nashville once produced also shows some affection for the place itself.

‘Guitars, Cadillacs Etc. Etc.” is not just a brilliant album – it still sounds great today – it is a pivotal album. Its phenomenal success shook up the country music establishment more than any other record at that time. Steve Earle was dismissed as a rock act, Lyle Lovett as idiosyncratic, and Randy Travis had enough crossover appeal not to worry them. Yoakam, on the other hand, went straight to the heart of the genre and reminded everyone about the fervour and excitement of real country music. He opened up the genre to a host of new young fans and made country music cool. For the reasons outlined, ‘Guitars, Cadillacs, Etc, Etc’ deserves the accolade of ‘Classic Americana Album’.