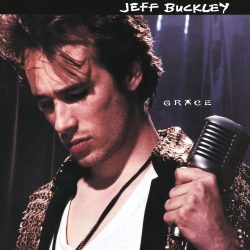 An ex boyfriend of mine once told me that a friend of his (whom I never met) got to see Jeff Buckley perform once. This was told to me years ago, yet I still sometimes find myself thinking enviously of this person whose name I don’t recall, which is a sure testament to the God-like level of worship Buckley brings when you hear his music.

Looking back, discovering Jeff Buckley was probably my earliest exposure to the genre loosely defined as Americana. I first heard of him in 1999 when the late-great Chris Cornell included a song about him (‘Wave Goodbye’) on his debut solo album. After catching one of Buckley’s videos on MTV2, I did what you needed to do to hear more of the music in those days: I went to HMV and bought the album. That album was, of course, ‘Grace’.

It’s impossible not to feel shivers down your spine when Buckley’s unearthly falsetto emerges at the beginning of ‘Mojo Pin’, even when you’re hearing it for possibly the hundredth time. Such is the tremendous power of an album like ‘Grace’; like lightning caught in a bottle, it’s something that can’t be replicated, no matter how the likes of Coldplay or Muse try with their frankly paltry imitations.

Swirling chords lead you into the title track, the melody building to the key change and the chorus feels transcendent. ‘Grace’ is a song about celebrating the beauty in life and you really feel it in your bones when you listen. “Oh drink a bit of wine we both might go tomorrow, oh my love,” Buckley resonates.

‘Last Goodbye’ is the heartbreaking tale of two people who love each other but know that it’s better if they end their relationship before they hurt each other further. “This is our last goodbye / I hate to feel the love between us die / But it’s over,” he sings on the opening lines, words cutting deep. Again, the vocals are stunning, the music sweeping and all-encompassing, and there’s a really clever verse where we get to hear the woman’s perspective.

When Buckley recorded ‘Lilac Wine’ he was only aware of it from the Nina Simone version and assumed that was the original, but the original recording was actually from Eartha Kitt in 1953. Interestingly, Buckley’s version has gained such acclaim that it has gone on to be assumed by many as an original itself; ‘Lilac Wine’ isn’t the only cover in the album to gain such a status though: ‘Hallelujah’ is widely regarded as the greatest recording of the song.

His version of ‘Hallelujah’, again inspired by a cover version of the original (in this case John Cale’s 1991 version), has surpassed the original by Leonard Cohan and gained a life of its own, often coming in at the top of lists dedicated to the greatest songs of all time. It’s really not hard to see why Buckley’s recording of ‘Hallelujah’ has gained such legendary status: he breathes new life into the song, giving it another otherworldly dreaminess with the intimate vocals against the gentle jangle of guitar, and of course that ever exquisite falsetto. Even though it feels like we’re hearing a single take, Buckley actually agonised on how best to record the song and tried many different versions, a composite put together by producer Andy Wallace makes up the final album version we’re all now so familiar with.

‘So Real’, originally slated to be a b-side rather than an album track, is a song whose lyrics refer to a collection of different relationships Buckley had had. Inspired by his most recent breakup, he wrote, “I love you, but I’m afraid to love you,” are some of the most powerful lyrics he ever penned; simple in their devastation.

A long intro featuring a harmonium gives ‘Lover, You Should’ve Come Over’ an immediately eerie feel, which plays into the opening lines (“Looking out the door I see the rain / Fall upon the funeral mourners”). The song is sprawling at almost seven minutes in length, but the length gives the song a chance to breathe and build. It’s the story of youth and other distractions destroying what could’ve been a fulfilling relationship (“Too young to hold on / And too old to just break free and run”), but told in the third person making the sense of detachment even more intense (Steve Berkowitz, a Columbia records producer who was responsible for signing Buckley, asked him to change it from third to first person, but Buckley refused). The inspiration behind the song Rebecca Moore, Buckley’s girlfriend at the time of the track’s conception, heard the song debut whilst sitting the audience at one of his shows, and unsurprisingly knew the writing was on the wall for their relationship (the more optimistic lines like, “It’s never over / My kingdom for a kiss upon her shoulder,” would only be added later).

As with ‘Hallelujah’, Buckley struggled with how he wanted ‘Corpus Christi Carol’ to sound and recorded many different versions; the one we hear is an unusual standout amongst the other tracks, but it’s ethereal and hauntingly beautiful and makes the commanding rock introduction of the next track, ‘Eternal Life’, all the more powerful.

‘Eternal Life’ is an anthem against hatred and injustice, which feels more prescient than ever 26 years later. Buckley said himself that the song was inspired by his rage over “the man that shot Martin Luther King, World War II, slaughter in Guyana and the Manson murders.” Not only do the themes in the lyrics hit hard, but the music does too; it demands attention. “Racist everyman, what have you done? / Man, you’ve made a killer of your unborn son,” are words all should heed.

The middle-eastern tinged ‘Dream Brother’ was written about a friend of Buckley’s who was considering breaking up with his pregnant girlfriend. The lyrics see Buckley pleading with his friend not to do this (“Don’t be like the one who made me so old / Don’t be like the one who left behind his name”), this act reminding Buckley of the way his father – the late folk singer Tim Buckley – had abandoned himself and his mother when Jeff was no more than a baby (he later said he only met his father once, when he was eight years old).

Tragically, ‘Grace’ would be the only studio album Buckley would leave us with: he was last seen by his bandmates swimming in the Mississippi River whilst singing the chorus to Led Zeppelin’s ‘Whole Lotta Love’. His death on the 29th May 1997 would be ruled an accidental drowning. He was just 30 years old.

While numerous archive recordings, demos, and even best of collections, have been released since his death, the 10 tracks on ‘Grace’ remain his legacy. And oh, what a legacy they are to leave.