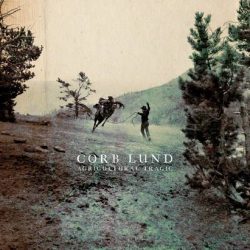 Corb Lund describes the approach to his 10th album as “what it feels like to have six generations of cowboy heritage thrown into the crazy 21st Century urban setting”. While he clearly works in the wider/Americana/Country tradition he has assimilated his influences into something all his own. The album’s title is also how he describes his whole style, basing that on his “narrative string of rural adversities”.

Growing up exposed to Indie Rock as much as Country in Alberta Canada first single and opening song ‘90 Seconds of Your Time’ kicks off with a ’60s style garage guitar sound. From here on the lyrics cover some traditional Western themes, whiskey, horses, trains, but despite Lund’s description the songs are mostly observed with a wry and sometimes humourous eye. ‘I Think You Oughta Try Whiskey’ which features country singer Jaida Dreyer, is a spirited barroom argument set to a Western Swing tune. ‘Grizzly Bear Blues’ has a twitchy Danny Gatton slide guitar riff backing a tale of a typical rural Canadian problem. “You don’t outrun the Griz, you just outrun your slowest buddy whoever that guy is”. ‘Louis L’Amour’ is an homage to the western writer over a spaghetti western theme.

Even the more traditional country songs, ‘Ranchin’, Ridin’, Romance’and ‘Dance With Your Spurs On’ still have elements of more modern styles creeping in. Lund and his backing band the Hurtin’ Albertans have been a unit for some time and it shows. He clearly writes around Grant Siemens’ lead guitar tone, which uses  baritone guitar to give a rich, velvety sound on some songs. The refreshingly clean unprocessed sound of the album highlights the traditional side of Lund’s sound. Last but one song ‘Rat Patrol’ is a full on rockabilly tune. The final piece ‘Tattoos Blues’ has spoken word verses which makes for a different ending to the album. A great sting in the last line of the lyrics as well.

In an alternate universe this is the sound of mainstream country music pulling influences from outlaw country especially Waylon Jennings, ’60s garage rock, and echoes of the Sir Douglas Quintet. A fun album for any time.

Nothing tragic about it - fine tunes and witty lyrics