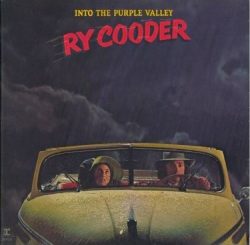 Ry Cooder has a unique and special place in the Americana realm, his reputation based on his consummate skills on guitar (especially slide, where many rate him among the world’s best) and mandolin, and as an arranger of roots and traditional music, from the USA and beyond. His musical legacy now spans five decades, 17 solo albums, as many collaborations again, including ‘Buena Vista Social Club’, and a similar number of movie soundtracks, most notably for Wim Wenders’ ‘Paris, Texas’.

‘Into the Purple Valley’ is his second solo album, dating from 1972, and was my personal introduction to his work. It features his groundbreaking approach to reworking traditional songs, with acoustic instrumentation, including slide guitar and mandolin, and arrangements which breath new life into songs, which positively bristle with vitality and freshness of approach. Musical genres from traditional country to blues, gospel, and calypso are blended to form an immediately recognizable style, which has stayed with Cooder throughout his long career.

The album’s opener is ‘How Can You Keep on Moving (Unless You Migrate Too)’ by Agnes Cunningham about the hardships faced by the Okies when they migrated west to escape the Dust Bowl in the 1930s , the tough times faced by the poor and downtrodden becoming a recurring theme in his work over the decades – a political approach to the power of music following in the tradition of Woody Guthrie. The song is given a jaunty, upbeat arrangement, the lyrics as pertinent now as when first written, or recorded by Cooder in 1972: “How can you keep on moving unless you migrate too/they tell ya to keep on moving but migrate, you must not do/the only reason for moving and the reason why I roam/to move to a new location and find myself a home”.

Following this is a powerful and rhythmic reworking of ‘Billy the Kid’, on mandolin and guitar, giving a harder edge to a romanticised traditional telling of an infamous character from the Wild West.

‘F.D.R. in Trinidad’ is a fine example of Cooder’s knack of finding songs from unusual, even obscure corners of traditional and roots music, a calypso song written by  Fritz McLean and recorded by Atilla the Hun (the performing name of Raymond Quevedo) to commemorate U.S. President Roosevelt’s 1936 trip to Trinidad, and finding great popularity in the 1930s.

‘Teardrops will Fall’ is a cover of a song first recorded by Dicky Doo and the Don’ts in 1958, in the doo-wop style, which was to remain an influence for Cooder, though his version of this song is memorable for injecting an emotion into the song largely absent from the original recording, again a trademark of his extensive catalogue.

‘Money Honey’ returns to themes of social injustice and the lives of the downtrodden, “Well, the landlord rang my front door bell/I let it rang for a long, long spell/Went to the window, peeked through the blind/Asked him to tell me what was on his mind/He said, Money honey, money honey, money honey/if you wanna stay here with me”.

The theme is maintained by ‘Taxes on the Farmer Feed Us All’, based on another traditional song from the depression era: “The farmer is the man, the farmer is the man/He lives on his credit until Fall/With the interest rates so high/It’s a wonder he don’t die/But the taxes on the farmer feeds us all”.
But this isn’t an album to put its message before musicality – there is a joie de vivre which still sounds fresh and vibrant today, and that fabulous slide guitar, featuring on most of the album, but most prominent on Cooder’s version of Woody Guthrie’s ‘Vigilante Man’,  an atmospheric stripped back version previewing his later work on ‘Paris, Texas’.

An outstanding album, a fine introduction to Cooder’s recordings for those new to him, and a huge influence on many who have followed in his wake.