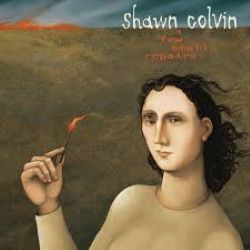 It’s funny how often the city of Austin gets a mention in these pages. South Dakota born Shawn Colvin arrived there via New York and California in the mid-90s, closing in on her 40th birthday, a soon to be discarded husband in tow and carrying a ton of baggage from ill-advised personal choices, both personal and musical. Colvin arrived in Austin with some success behind her. Her 1989 debut ‘Steady On’ won a Grammy for Best Contemporary Folk Album in 1991 and subsequent releases were nominated in the same category. Her great songwriting collaborator in those early recordings had been John Leventhal, who had also co-produced the albums, but a split in both personal and musical terms followed.

Putting what Colvin would state in her 2012 memoirs Diamond in The Rough, “the wreckage of our romance” behind her, Colvin contacted Leventhal once more and discovered that, without the tensions of a personal relationship, their productive musical collaboration could resume.

It was the release of the single ‘Sunny Came Home’ that propelled the resulting album ‘A Few Small Repairs’ to success and brought Shawn Colvin to the attention of a much wider audience beyond that of her earlier folk following.

The first single released from the album was ‘Get Out Of This House’, an up-tempo rocker, Colvin spitting out the first verse with a pissed off passion, the remnants of her recent failed marriage reverberating on the lyrics “Go jump in the lake, go ride up the hill, get out of  this house, It’s a house of your making, it’s a house of ill will, get out of this house.”

‘Get Out’ achieved modest success but it was the subsequent release of ‘Sunny’ that was the game-changer. Having failed miserably to achieve any notable success with previous single releases in her career Colvin wasn’t, in her own words, paying much attention when word broke of the wide airplay and sleeper success of the song. That song was to win two Grammys, Song of The Year and Record of The Year. Colvin’s career was transformed.

With the type of irony that often comes to accompany these stories, ‘Sunny’ was an afterthought on the album. A last-minute rewrite was inspired by Colvin’s choice of the album cover art by her friend Julie Speed. Colvin found she could relate to Speed’s themes of women on the verge. From her memoirs Colvin tells the story;

“In an actual moment of marketing wisdom, of which I generally possess very little, I decided to finish that last song by making it about the woman in the painting. I called her Sunny, wove in the line “it’s time for a few small repairs,” and the record was done.  I called it – what else? – A Few Small Repairs.”

If ‘Sunny’ was the catalyst that drew an audience to the album then that was both fortuitous and well deserved. ‘Sunny’ grabs all the attention but the songs are a showcase for a wonderfully talented songwriting partnership and the album contains a number of memorable tracks. Stand outs included ‘Wichita Skyline’, ‘Suicide Alley’, ‘The Facts About Jimmy’ and ‘If I Were Brave’, the latter song finding Colvin questioning her role in that failed marriage and what she could have done to make it work.

Shawn Colvin has a back catalogue that spans 30+ years and continues to prove that ‘Sunny’ and ‘A Few Small Repairs’ was a launchpad to a career and legacy that stands up to scrutiny, adding yet another successful notation in that Americana success story that is, Austin, Texas.

About Peter Churchill 108 Articles
Lover of intelligent singer-songwriters; a little bit country; a little bit folk; a little bit Americana. Perfect Day - early morning round of golf, afternoon at Dean Court watching AFC Bournemouth, evening gig at a cosy smallish venue with a pint and a packet of scratchings.