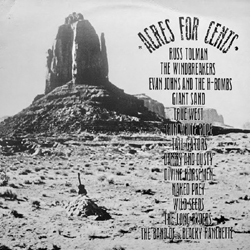 What is a compilation album? A bespoke tribute to a singular artist might be considered to be a compilation, but for this writer it’s basically a bunch of otherwise available songs slung together for one reason or another. Usually the reason is to sell more records of course. Much has been made in these pages of Uncut’s series of Americana themed cover mount CDs. It’s like your friendly neighbourhood drug dealer wheeling you in as he whispers, “The first one’s free…” And ofttimes, that dealer was a record label. There’s an honourable tradition of labels selling compilations of their artists at loss-leading prices, sometimes with an otherwise unavailable track as an additional incentive. Some of those albums are now revered. Think of Island Records’ ‘We Can All Join In’, the CBS sampler, ‘The Rock Machine Turns You On’, or Atlantic Records’ ‘Age Of Atlantic’. Here we’d like to make a case for this 1987 release to join that pantheon.

On the surface, the ‘80s was a dismal decade for music.  Commerce was taking over while, in the roots field, many were struggling to cope with new technology as studio production became over glossed. REM of course were one ray of hope but there was also an underground of sorts and in terms of what would become Americana one of the melting pots was LA and the desert states adjacent to California. Here, kids, nourished on punk and new wave, were discovering their roots, The Blasters and X were probably first off the block, keenly followed by Green On Red while there was also the so-called Paisley Underground. Meanwhile, down in sleepy London town, Zippo Records, a subdivision of Demon Records, were licensing obscure recordings from Tucson and Austin and the like and ‘Acres For Cents’ was their £1.99 priced introduction to this new wave of American roots rockers.

Thirty years down the line, ‘Acres For Cents’ remains a great album. The bands are lean and hungry, eager to get out the traps. There’s no ‘80s styled production here (they probably couldn’t afford a Roland synth and didn’t get gated reverb). Instead there’s squalling and thrashing guitars, Doors’ like organ riffs, whiffs of The Velvet Underground as filtered through The Dream Syndicate, some psychedelia and country and above all else an untrammelled sense of adventure. The best-known act on the album, The Long Ryders, are represented by ‘10-5-60′, from their self titled debut mini-album – despite them having released two full album on major labels by then. This is explained in the (uncredited) liner notes which explain that Zippo had just got the rights to release it in the UK. Anyhow, it fits in well here as they rattle through an amphetamined Byrds’ like rumble. Steve Wynn and Dan Stuart get a shout in as Danny & Dusty with an excellent barroom duet, ‘Bend In The Road’ ( a definite hook in as the song wasn’t on their album) while Howe Gelb gets to make two appearances. As Giant Sand he has the scorching desert rock of ‘Thin Line Man’ while under the guise of The Band Of Blacky Ranchette he delivers ‘Heartland’, a true country anthem which remains quite stellar. As the notes say, “It’s that man Gelb again, writing country songs of a calibre that deserve to make him a STAR…and yet he languishes out there in the desert and he still hasn’t got a record deal in the States!”

Also making two appearances is Russ Tolman, one of the founding members of True West. ‘Backroad Bridge Song’ from the True West album ‘Drifters’ is propelled by pummelling percussion as their guitars twist and turn like a mountain switchback road and Tolman snarls away. His solo effort, ‘Talking Hoover Dam Blues’ (from the superb ‘Totem Poles And Glory Holes’ album) perfects this approach and really it should have you checking out this guy’s back catalogue.

The mighty Thin White Rope are represented by a splendid conjunction of Wishbone Ash-like guitar splendour and grungy vocals on ‘Moonhead’ and Evan Johns & The H-Bombs likewise have liquid guitars spiralling away although the bedrock here is somewhat akin to Beefheart’s mutant blues. Toss in a Blaster’s like romp from The Tail Gators, a magnificent mash-up of The Byrds and REM from The Windbreakers, and Naked Prey’s ridiculously excellent update of The Stooges’ sound and there’s plenty of proto Americana sturm und drang to get excited about. There’s also a premonition of things to come in the era of No Depression and alt-country. Wild Seeds have the hypnotic ‘Pure Heart’ which actually has a chorus of “Yip-e-yi-yip-e-yi-yay” sung over crystalline guitars and Divine Horsemen herald the Americana Gothic yet to come from the likes of 16 Horsepower on ‘Tears Fall Away’.

Back in the days, ‘Acres For Cents’ was like having a defibrillator jolt you back into life. It certainly cost me more than the initial £1.99 as I pursued the albums from the acts featured but that’s part of the excitement a great compilation album will offer. More importantly, the songs here stand the test of time. It’s long out of print but copies (vinyl, no CD as far as I can see) are available for decent prices online and it’s recommended for anyone wanting to know about the beating heart of the hinterland before Uncut woke many up to the glorious sounds of Americana themed roots music.