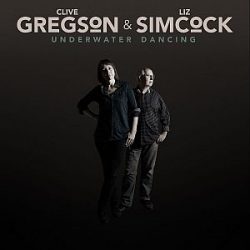 Clive Gregson’s musical pedigree – not only as the founder in 1975 of his band, Any Trouble, and his work with Richard Thompson, but also in the partnership he forged with Christine Collister over five albums between 1985 and 1992 – is well documented. It was during a tour he undertook with Liz Simcock in 2015 to revisit the Gregson/Collister back catalogue that led to the collaboration on this current album, ‘Underwater Dancing.’

Where this partnership works well is in the contrasting singing styles of the duo, Liz Simcock’s voice being redolent of Maddy Prior’s at times, particularly on songs like ‘Instead of the Rain’ – no higher compliment could be paid.  There’s also some lovely accompaniment to Gregson’s playing of guitar and keyboard at times, including woodwind support from Fiona Lander on saxophone for songs like ‘Me and You’ and clarinet on ‘One in a Million.’ However, the jaunty rhythm of many of the songs on the album often belies their darker subject matter. The opening number, ‘Raining All Over the World,’ is one of the strongest, although the song title gives an inkling of how Gregson views the troubled times we live in. Similarly, the upbeat ‘Walking Along This Road’ features the line, “We’re all heading for the great unknown.” Other songs on the record such as ‘One Big Mess’ are more personal and introspective in nature: “We’re all caught up in one big mess/All my fault I guess..”

Whilst the vocals and musical arrangements hold up well, the principal problem is the lack of strength in the songwriting, with few of the songs proving particularly memorable and the lyrics tending to err somewhat on the trite side. The difficulty with sustaining a musical career over four decades is that you’re inevitably – and perhaps unfairly – compared to your best work,  and sadly the mediocrity of this current crop of tunes stands in sharp contrast to the exceptional standard of songs from the Gregson/Collister repertoire such as ‘It’s All Just Talk’ and ‘I Specialise.’