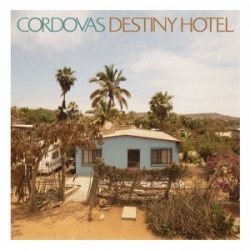 On ‘Destiny Hotel‘ Cordovas blend country and southern rock with a lightness of touch that takes them deep into the roots of Americana. Above all soar their magnificent harmonies as Cordovas create a sense of total abandon from the day to day drudgeries of life. Songwriter, bassist and vocalist Joe Firstman may have formed the four-piece band but this third studio album is very much a product of the band’s communal lifestyle. They all live together on a farm near Nashville. Before recording ‘Destiny Hotel’ they spent over three months living in an artists’ collective in Mexico. Such unity harks back to The Band’s Big Pink. To that classic Americana Cordovas add some Allman Brothers and Grateful Dead.

Led by the piano line opener ‘High Feeling’ is aptly titled as Cordovas exude warmth settling into their relaxed vibe. 1970s west coast country rock comes out in ‘Rain On The Rail’. Its brisk pace evokes a warm breeze as B3 organ and banjo juxtapose. ‘Fine Life’ typifies their approach, “it’s a fine life/fine as I’ve ever known”. The easy-going fiddle and harmonies add to the sense of appreciating life’s simple pleasures.

‘Afraid No More’ is a pledge to live free from fear. Again, the billowing country-rock blows away any anxieties. Cordovas have built a reputation for their live show to which ‘The Game’ will be a great addition. CSNY harmonies and a punchy guitar riff power the album’s rocker. A similar effect comes from ‘I’ma Be Me’, further thoughts on the theme of being true to self.

Cordovas finish with the similarly straightforward advice of ‘Do More Good’. Sonically and lyrically this could be their anthem. “Gonna do more good and talk less s..t/that’s about all I’m gonna do”. If that’s not a line for these times then what is?