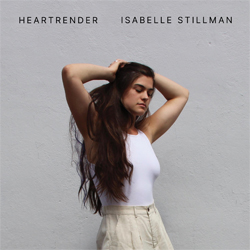 Apparently LA-based singer-songwriter Isabelle Stillman’s second album, ‘Heartrender’, ‘comes from a place of vulnerability and awakening that can only be sparked through transition, pitfalls and personal upheaval’. To be honest, from listening to it, it sounds like she’s had a rough time and she wants us all to know about it.

First song, ‘Damage Control’, doesn’t mess around. Aimed at an ex-lover who’s wronged her (“Didn’t you know, you can’t control that I’m damageable?”), it’s swaggering and angry, with crunchy guitars. Sadly, it’s also the kind of slick and polished, radio-friendly, whiny, sub-Alanis Morissette/Avril Lavigne-style, soft ‘indie’ rock we’ve heard countless times before. It’s followed with the similarly blustering, but bluesier, ‘The Gun’, on which she sounds even more furious: “I walked into your line of fire. You took your shot with a bullet that I loaded for you. So now what’s done is done, but you’re the one holding the gun.”

Take cover, everyone! Oh, don’t worry – it’s misfired. By track three, the stripped-down, electric guitar and organ ballad, ‘Party Dress’, things have calmed down a bit, but Stillman is still upset, moaning about someone who has forgotten to turn the stove off and lock the door behind them. Domestic sloppiness also comes in for scrutiny on another of the album’s more downbeat moments, ‘Grocery Store’, where someone, presumably the same offender from ‘Party Dress’, has gone to work without buying any food, so the fridge is empty and Stillman’s had to eat a frozen dinner. Most of us would write a Post-It Note and stick it in the kitchen, or perhaps send a text, but she has gone the whole hog and penned a song about it: “We’ll carry all the bags together, after every grocery store fight.” If any marketing execs who work for a grocery delivery service are reading this, you’ve just found your next ‘emotional’ TV ad soundtrack for Christmas 2021.

After an aggressive and attention-grabbing start, the album sags halfway through. Too many plodding and introspective guitar ballads weigh it down – like when you’re carrying heavy shopping bags. ‘Tragicomedy’, which is a dramatic, piano-led slow song, is momentarily diverting, but closer, ‘Center of the Universe’ – another ballad – fails to shine and soon burns out, like a dying star.

Stillman started work on ‘Heartrender’ pre-Covid-19, while employed as a high school English teacher in Denver, Colorado. She then spent a year travelling on her first national tour, which was cut short by the global pandemic. Let’s hope she remembered to turn off the stove before she left the house.

Angry and introspective complaint-rock that takes aim and fires at an ex-partner, but misses its target