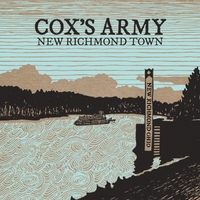 As Ken Burns’ recent documentary series “Country Music” highlighted, bluegrass music was a big part of country music’s history – in fact without it, the genre probably would have sounded a whole lot different and might not have been born. So, the release of traditional bluegrass band, Cox’s Army’s second album ‘New Richmond Town’, couldn’t have been timelier.

Based in Chicago, the band consists of ‘Cousin’ Chuck Cox (guitar and vocals), Laird Patten (banjo), Jeff Burke (mandolin and vocals) and Jack Campbell (bass and vocals). Following in the illustrious footsteps of The Stanley Brothers, Bill Monroe & The Blue Grass Boys and Flatt & Scruggs, the thirteen tracks on the album are fun, toe-tapping and jaunty with a touch of humour too. There are songs about cheating on your loved one, porcupines, graves being dug in the wrong place and, of course, lyrics about highways, cars and mom and pop – the staples of any self-respecting country album. There are ballads, waltzes and songs that speed along like a souped-up Ford Mustang on Route 66 – this is not an album to fall asleep to.

The stand-out tracks are ‘No One Steps Out On Sarah Jane’, a sad tale of infidelity with a jaunty mandolin and banjo accompaniment, the one instrumental on the album ‘Big Spoon, Little Spoon’ and ‘You Dug That Hole On The Wrong Side’, a lament on the unusual subject about someone’s parent’s grave being dug in the wrong place!

Recorded the old-school way around a small microphone cluster featuring all the instruments you’d expect from a bluegrass band with mandolin and banjo to the fore – there’s the occasional fiddle too. The band’s harmonies are superb, and their voices complement each other perfectly. The production quality is first rate so kudos to the producer Chris Walz for giving the album an old fashioned but timeless quality using no edits or modern studio tricks – everything was recorded live. Lots of credit goes to Ricky Wasson who mixed the album and managed to keep the harmonies warm and the acoustic instruments sharp and crystal clear.

With all due respect to the band, they’re no whippersnappers and their music has that gnarled, lived in feel that only time and experience can bring. ‘New Richmond Town’ is a reminder of what fun bluegrass music can be and that you can’t beat the sound of acoustic instruments and wonderful, untreated close harmony voices.