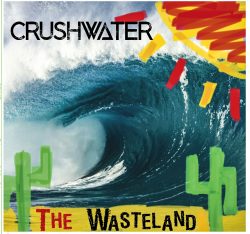 Crushwater is Scott Sullivan on guitar/vocals, Chandra Johnson on Violin/Vocals, Enoch Bowlby on Bass and John Carlson on Drums and they hail from Port Angeles in Washington State. The keystone of this band is the interplay between Scott Sullivan and Chandra Johnson, with Johnson providing the counterpoint to Sullivan’s voice and guitar, bringing her harmony vocals and violin improvisation to bear on his songs.

There’s a nice back story to the band that sees classically trained Johnson coming into the NY style Pizzeria owned by Sullivan and looking for work. The place had become a hub for local musicians, since Sullivan was already well established as a singer/songwriter, with five solo albums under his belt. Sullivan and Johnson bonded over their musical interests and the band grew from that. Sullivan’s songs are OK. They’re, predominantly, upbeat bouncy bar room songs of the “life’s a lot of fun if you just get out and live it” variety, though the lyrics are more than a bit clunky on occasions – “You were right, when you said that I was wrong/ It didn’t take long to find out, that this wasn’t going to work out” (‘The Landfill’), or ‘Sippin’ in the Sun’ with its “Can’t believe the news, ‘cause it’s always singing the blues….She’s living on the run/ she’s sippin’ in the sun/And feeling fine”. It’s to be hoped that the use of Spanish for the first verse of ‘Starry Skies’ lift’s the literary content as, when the song goes into English, we get the rather leaden “We’ll get by, under the starry sky”!

If the songs aren’t particularly clever lyrically, and there is a lot of predictability about Sullivan’s lyrics, they do have some quite catchy and well put together tunes and you can see them working well in a small concert setting where the audience can be encouraged to sing along – Crushwater certainly sound like a good time band. The tracks that show off the band’s musicality best are probably the slower ‘California’, with its beautiful violin intro and the very creative use of instrumentation on the title track ‘The Wasteland’.

When it comes down to it, it’s Johnson’s harmonies and violin work that really lift these songs. Sullivan’s voice is good if nothing outstanding, but Johnson’s harmony singing blends really well and gives these songs the vibrancy they need. Similarly, it’s the violin that drives these songs along and makes them a bit more than just good bar room sing-alongs. There are some very good musical ideas around this band and a lot of potential – if they can just improve on those lyrics.