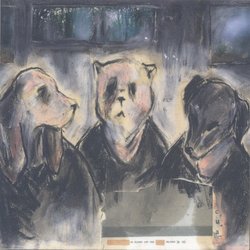 The press release accompanying Cua’s (pronounced CooAhh) latest album quotes AUK’s Jeremy Searle discussing their last release. He said then: “this Irish trio stands right at the forefront of contemporary cutting-edge folk”. And that still stands on this new recording. If you must categorise it then I suppose it is Irish or Celtic folk music but that doesn’t begin to cover the breadth of influences and styles present here.

‘Lover’s Sea‘ has an almost classical guitar opening and the instrumental ‘Sí Beag Sí Mór‘ repeats this with gentle fiddle backing. ‘Are You Livin’?‘ in contrast has an almost indie rock feel to it. This could be The Sundays quite easily. The band describe ‘Together‘ as “a punk song with the irony of argument”. Throughout the album lyrics mostly express frustration at the state of the world. Best song on the album ‘We‘ has “We are all born perfect and unique” as its main refrain for instance. Contrast comes in the form of two accapella songs: ‘Sweet Liberty‘ and Ewan MacColl’s ‘Tunnel Tigers‘.

If there is a criticism of this album it is that while the quality of songwriting is very high, the sheer number of songs – fifteen in around an hour’s playing time – mean the qualities of of some of the songs can take some while to become apparent. The final track ‘Where Is The Sound Gone?‘ is one of the best songs and performances here with its jazz and blues feel. Being tucked away at the end it does get a bit lost. Perhaps a 40 minute album and an E.P. might have highlighted the quality of the songs better.

Cua make great use of the limited palette of Guitar, Fiddle and Bouzouki, with at times almost soul music like washes of strings, as well as the aforementioned classical style guitar. Overall this an album that while living in the general area of folk music transcends that, or any other category. An earlier release would certainly have seen it on the album of the year list for 2019.