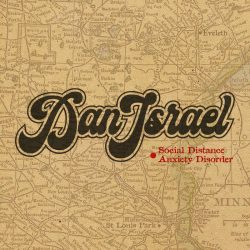 If you were to peruse Dan Israel’s prodigious output of albums,  you would come across some of the following titles: ‘Dan’, 2015, ‘Danthology’, 2013, ‘Dan Israel’, 2005 and the modestly entitled, ‘Dan Who?’, 2001. Now, of course, there are other non-Dan related titles, but the evidence suggests that Israel is a man who likes his themes, the latest of which saw its inception in 2019 when he released, ‘Social Media Anxiety Disorder’ which has now been followed by the album featured in this review, namely, ‘Social Distance Anxiety Disorder’. All of which adds up to concerning levels of societal dysfunction which could conceivably be added to as time progresses.

For twenty- one years, Israel juggled his musical career with working for Minnesota State Legislator, waiting until 2017 before he took the courageous step of dedicating his energy full- time to the callings of a folk-rocker. The latest album related manifestation of this energy kicks off with, ‘Wits End’,  where a beguilingly upbeat tempo belies themes of an outsider looking in and feelings of alienation; it feels like a cry for understanding.  ‘Bewildered’ echoes with the tones of Tom Petty and has Israel bemoaning isolation through technology and a longing for more certain times. The guitar riff and tight snare sound further lean towards the Petty influence on ‘Bustin’ Out’, whilst Israel’s vocals sound positively Dylanesque on ‘Don’t Think They’ll Say’, capturing the zeitgeist with the lines, “I ain’t been this scared in years”.  ‘Trying for a Long Time’ with its beautiful, lilting acoustic riff and cello is pure mid-seventies west-coast and none the worse for that, whilst displaying a touching vulnerability.

After one or two less notable rock orientated tracks, Israel enters acoustic – reflective mode for the finale of, ‘Vision in my Dreams’ where he is, “Tired of Loneliness and Pain”. With overt reference to mental health within this album’s title, further references are sprinkled throughout the songs which may prompt reflection that these are issues that can and do affect us all. Through his music, Israel is able to share his experience and offer solace to the listener without pretending that there are any easy answers to the challenges that we are all facing.