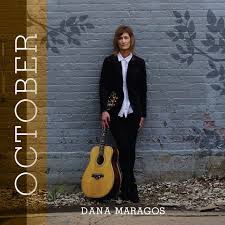 Following on from her 2017 three-track EP, Dana Maragos has just released ‘October’, her first full-length album although with only eight tracks and a running time of just under twenty-seven minutes, it’s more like an extended EP – if there is such a thing! Maragos is a Chicago born and based singer-songwriter, but you’d never guess that from this album as it has all the feel of rural America rather than the big city. The songs are all about going on journeys, losing jobs, love, not belonging and they’re based in places like Virginia and Menomonee. The album has the sound and feel of the open road and a big sky – not the urban blues of Chicago’s south side although one track, ‘Come And See Me’ has a bluesy feel to it with slide guitar and harmonica providing a different texture to most of the other tracks on the album.

On the whole the instrumentation is pure Americana with acoustic and slide guitars, mandolin, pedal steel, accordion and the occasional fiddle. Most of the songs are ballads or mid-tempo, although one of the stand-out tracks is ‘The Future of Everything’ which has drums and bass to the fore with a flute giving the track a jazzy, upbeat feel.

Other stand-out songs are the title track which seems to be about people who, like the seasons, come and go in a person’s life and which includes the evocative line “Summer’s just turned down a dead-end road” and the opening track ‘Virginia’, with its melancholy lyrics which seems to be about a soldier going off to war but it’s one of those songs that’s open to interpretation by the individual listener.

Dana Maragos is a superb songwriter with an excellent turn of phrase and the songs seem deeply personal, even those that seem to be about a man rather than a woman; she may be writing in the third person but there’s the feeling that those songs are wrapped in metaphor and allegory.

Maragos has a superb voice that has echoes in it of Mary Chapin Carpenter and Beth Nielsen Chapman which is no bad thing. To complement her voice, she’s backed by a number of local musicians and superbly produced by Brian Wilkie who also contributes pedal steel, slide and electric guitar and has given the album a crystal clear sound which showcases Maragos’s voice and is a pleasure to listen to.

'October" from Dana Maragos is a short but perfectly formed album