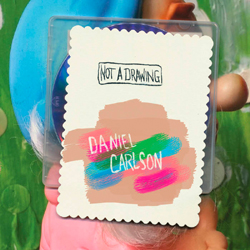 This third album from New Yorker, Daniel Carlson, is sure to delight anyone who believes that Paul McCartney and Brian Wilson are the bee’s knees, the best, the topper most. Carlson, like them, writes sweet songs, melodic, occasionally quirky, and on this album, uses a panoply of instruments which very much recall the Beach Boys’ head honcho’s “teenage symphonies.”

Much like the early High Llamas (who were drenched in Wilson’s work while Sean O’Hagan gets a name check in the liner notes) Carlson recreates the sounds of the sixties, playing all of the instruments himself while his voice (often multitracked) is not a million miles away from Wilson’s. The McCartney influence is less noticeable despite his being the name used in the publicity bumf (they mention Pink Floyd as well but I just don’t hear that). Consider perhaps that Not A Drawing is a tribute of sorts to Smile and Ram.

It’s a delightful album, short and sweet. Eight songs swathed in melody, awash with wonderful keyboard sounds and guitars transformed by a Gizmotron (a device invented by Godley & Creme which allows a guitar to sound like a cello or violin). Immaculately layered, the instrumentation creates an exotic backdrop for Carlson’s fine vocals which, like the instruments is treated in all sorts of ways, the pinnacle being the variety of effects on the psychedelic weirdness of All On Display. Throughout the album there are moments of wonderment – the synthesiser warbles on Just Like Nothing,  the shimmering guitar effects on I See You There and the repetitive synth motif on Everybody’s Dumb About You. The album closes on a high with Farther, Faster, Safer, a song suite which starts out in a similar fashion to Surf’s Up, a foggy paean to past times, then into a burbling synth drenched vocal bridge before ending with snatches of radio voices, all in the space of seven minutes. A wonderful close to a wonderful album.