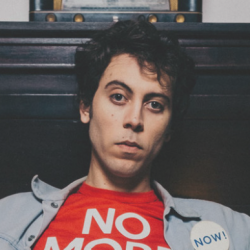 Rock’n’ roll chameleon Daniel Romano has arrived in the UK for a string of shows to promote his recently released seventh album, Modern Pressure, out now on New West Records.
Romano, fresh from his first appearance at End Of The Road Festival will be headlining The Borderline in London with his full band on November 18th as well as shows in Leeds, Glasgow, Coventry, Dublin, Manchester and Newcastle.   The Leeds one was last night actually so apologies to our Yorkshire readers.

Over the past decade, Romano has gained three Polaris Music Prize nominations and three Juno nominations, as well as been awarded two platinum albums and Juno Awards for his performance, production, and arrangement work with artist City and Colour. His 2015 New West Records debut If I’ve Only One Time Askin’ garnered rave reviews from NPR’s Fresh Air, Rolling Stone Country, Mojo, Uncut, Boston Globe, and Exclaim! ; and it set the stage for the release of Mosey which Pitchfork called “a solid entry in the new-school canon of hybrid country” and The Line of Best Fit named one of “The Fifty Best Deep Cuts of 2016.” Be careful with those deep cuts.