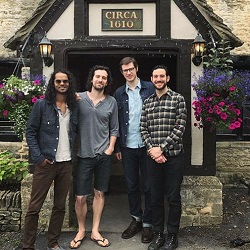 On their third trip to the UK, Massachusetts based indie-folk band Darlingside are continuing to build their reputation as a knock-out live band.  With subtle musical shadings taking cues from folk, chamber pop, bluegrass, classical music, and modern indie rock, and aching harmonies they have a sound which recalls the likes of CSN, Fleet Foxes and Great Lake Swimmers.  The four piece – bassist Dave Senft, guitarist and banjo player Don Mitchell, classical violinist and folk mandolinist Auyon Mukharji, and cellist and guitar picker Harris Paseltiner  – also have a well received new album Birds Say, which features the superbly tuneful My Girl, My Guy, there’s a video of it just a little further down (coincidence, huh ?).

The naming of the band reflects the humour, wordplay, and banter that the four close friends share on and off stage “Pesticide is used to kill pests. Fratricide is when you kill your brother,” explains Darlingside’s Dave Senft. “A former teacher of ours used to say ‘kill your darlings,’ which is to say, if you fall in love with something you’ve written you should cross it out. We like that idea and we thought a good name for it might be ‘darlingcide’, but we changed the ‘c’ to an ‘s’ because we’re not super into death.”   Same here fellas, same here.

Catch them on any of these dates –