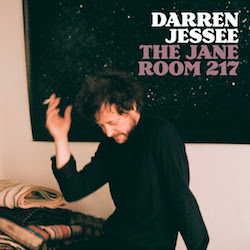 For much of his career, North Carolina’s Darren Jessee has contented himself with standing (or, more accurately – drumming) at the edge of the spotlight. Excerpts from his resume include: member of Hiss Golden Messenger, contributor to The War on Drugs’ ‘A Deeper Understanding’ and co-writer of Ben Folds Five’s biggest hit ‘Brick.’ ‘The Jane Room 217,’ though, represents his first foray under his own name. The genesis of the project was a series of Jessee’s demos mixed by long-time collaborator Alan Weatherhead.

The sonic die is cast from the outset; Jessee has a hushed vocal style that is well-suited to the confessional subject matter of the songs. On ‘Anything You Need,’ his delivery of the chorus’ couplet ‘‘Summer girls reading books in sheer dresses, summer boys giving it all – leaving messes,’’ recalls Elliott Smith. A similar fragility is evident in the falsetto of ‘Letting You Go,’ where Jessee sings ‘‘Don’t you take it too bad – I always knew I was your mistake.’’ The key to the album’s sound is the lush orchestral arrangements provided by Trey Pollard (Spacebomb Records) that feature on each track. The album’s songs of heartbreak and despair are intensely personal, but the orchestral arrangements lend a sweetness to proceedings that prevents this work slipping into mere introspection.

Lyrically, Jessee veers from stream-of-consciousness in lines like ‘‘oranges and coffee, time standing still’’ on ‘True Blue’ to visceral images of places and vanishing moments in the gorgeous melancholy of ‘Dying Violins.’ ‘‘LA Airport – 2 flights to go’’ sets the scene. An image is then created of ‘‘coming down, crying behind yourshades’’ – it’s serious stuff… Song titles like ‘Ruins’ and ‘All but A Dream’ show how despair is an ongoing thread. While Jessee provides a window into his suffering there is, ultimately, no happy ending: “Go on baby break down” closes the selection and sees the departing lover ‘‘doing [their] best impression of a mannequin.’’

This, then, is a record that feels like a long, bittersweet goodbye at the end of a relationship. Jessee’s voice won’t be to everyone’s taste, but it is smoothed by glorious instrumentation throughout. A broader range of tempos would have been a plus, but the slower pace of the material mirrors the sombre mood. As an album, it is not an easy ride; the listener shares the pain of the protagonist and accompanies them on a journey. This is categorically not background music.

Drumming luminary finds his voice during a first solo flight