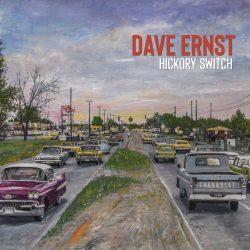 After nearly three decades in numerous Louisville, Kentucky bands, Dave Ernst releases his debut solo album, and has got it just right. Short and snappy, with no room for filler, Ernst includes six of his own songs – no doubt carefully curated through his time on the scene – carefully matched with two fitting covers. Influences are proudly worn and referenced. Originality is fine, but if you get the basics right like this, the relative lack of freshness is almost a bonus. Strong songs, gutsy voice and lashings of telecasters in a clear mix mean that, in this case, familiarity breeds anything but contempt.

Ernst freely offers Drive-By Truckers, Old 97’s, Uncle Tupelo and many more as his markers, but it’s Crazy Horse that come more to mind in strong opener ‘Superstar’, with its power chords and epic solos. ‘Wreckin’ Just Fine’ plays with its homonym of reckon to explore a relationship that is anything but dull, and has the genius lyric “It was love at first fight”. ‘Pallbearer’, with its simple triples is a tribute to his father. ‘Hickory Switch’ is the corporal punishment in his south. All the songs would stand as singer/songwriter strums of everyday life, but the grit and guts fill them out to really make them soar. Ernst recently recovered from thyroid cancer, and it’s not fanciful to speculate that the force and warmth here come with the joy of a further chance. Decent R.E.M. covers are rare, but ‘Driver 8’ is a good choice here in an acoustic version (though the aforementioned Old 97’s have also covered it faster, louder and better?). It’s the searing version of Todd Snider’s ‘Rocket Fuel’ that is the better cover. 29 minutes of the finest alt-country, ideal length for an immediate repeat play.

Play loud, then repeat for an alt-country treat