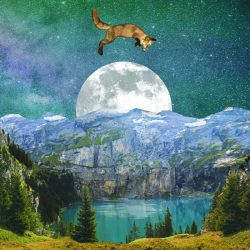 With his second album ‘Songs from Aurora’, Mancunian Dave Fidler has crafted 12 tracks of smooth, laid back music with evocative tales describing subjects as diverse as life in a Haitian women’s prison, to getting perilously trapped beneath a collapsed house in the midst of a Los Angeles earthquake.  Listeners inclined to search for comparisons will certainly detect similarities with Crosby, Still & Nash and possibly even Nick Drake, and Fidler’s ability to paint pictures with his words, allied to a stripped back production, makes for a consistently crafted album.

Much of Fidler’s songwriting creativity came during a particularly productive period in the summer of 2018 and in seemingly no time at all, the foundations of what would be the follow up to his 2014 debut album ‘I’m Not Here’ had emerged. With much of the writing taking place within his trusty caravan ‘Aurora’, that proved to be his sanctuary during its time of writing, there could only ever be one title for the new release and ‘Songs from Aurora’ appeared.

The album covers a variety of genres, opening with gentle country-tinged ‘On The Line’ and moves into blues territory with ‘The Water’ and into mellow country rock territory with ‘Eternal Road’. There’s really isn’t a bad track on the album, however, that’s the achilles heel of this release as there isn’t a truly memorable or outstanding track either, and that’s the most frustrating aspect of what is fundamentally a pleasantly solid album that shows signs that it could have been so much better. Fidler sings well enough, clearly plays well, but ‘Songs from Aurora’ is crying out for an injection of raw emotion to truly bring it to life.