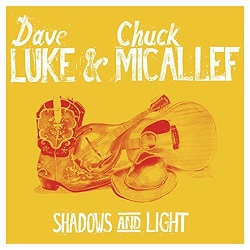 The question of authenticity is something of a bother from time to time – particularly when it comes to music. That age old, folk club-endorsed argument of whether it’s okay for an Englishman to affect an American accent in song is at once as frustrating as it is trivial. If you’re the kind of person that gets hung up on this kind of thing (or indeed find yourself pondering whether or not it’s acceptable for a Canadian to play bluegrass, as ably demonstrated by the other 50% of the case in point we find here), you might want to adjust your wiring. If, however, you’re willing to sidestep such nonsense and simply want to engage with a collection of songs that are clearly born of a desire to render a contemporary take on American roots music by exploring the power of ‘the duet’, look no further- “Shadows and Light” is a gentler but easily as good a place to start as the acclaimed Billy Bragg and Joe Henry’s “Shine A Light” or John Prine’s “For Better or Worse.”

Built around the interplay of harmonising vocals, acoustic guitar and mandolin of messrs Luke and Micallef, the 11 songs presented here (mostly original with a couple of notable exceptions) feel almost effortless. Recorded to give an almost tangible sense of intimacy, the recordings are devoid of trickery and imbued with a warmth and subtlety that is captivating, allowing the simplest of arrangements the freedom to speak for themselves. Highlights are peppered throughout the record – the title track offers an instant indication of the goods on offer, showcasing an impressively tight interplay between mandolin, guitar and vocal harmonies; Kiss From Heaven is simple, expressive and could easily be mistaken for an old time classic…  and the classics could, by the same token, have been penned by the duo themselves, they feel that at home. The only ill-fitting moment comes with the more folky The Moon, The Stars and The Sun – not a bad song, by any stretch, it simply feels out of place.

The aptly entitled “Shadows and Light” is an immensely credible work which demonstrates a commendable commitment to capturing a snapshot of two musicians who, like Bragg and Henry, may have been flying parallel but have landed in the same place and, my word, what a landing.

A gentle and engaging collection of roots music, through which Luke & Micallef demonstrate an honest love for their craft.