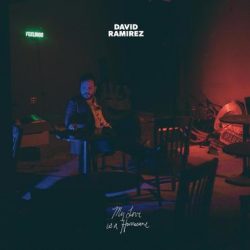 David Ramirez is releasing his fifth album ‘My Love Is A Hurricane’ via SweetWorld/Thirty Tigers, the second not self-produced after first using an outside producer on 2017’s ‘We’re Not Going Anywhere’. This time that role goes to Jason Burt (who has worked with Leon Bridges), and the album explores different musical influences moving away from the more traditional Americana of his earlier work. The songs make use of soul, gospel and R&B influences with the involvement of other musicians strengthening the production.
While his previous highly regarded album was focused on his Mexican-American identity in the United States under Donald Trump’s divisive Presidency, ‘My Love is A Hurricane’ was written while in the throes of a relationship which blossomed and dissolved during its recording. Ramirez began writing these songs in 2017 when this relationship led to a creative outpouring of music about his newfound love. When it ended he decided to carry on recording these ten songs on this album as a paean to love documenting his experience.

It does make you wonder what made the relationship come to an end. On ‘Easy Does It’ Ramirez sounds as if he is trying to save his partner when he sings “when the weight is adding up and you feel you might be crushed I am here to help you lift it.” When it seems that it is coming to an end he seems to implore her to escape together with him on ‘Coast to Coast’. Ramirez singing that they are in a ‘city full of fools” and that she could “just say the word and we’ll be out of her tonight” escaping together as he “know(s) this land like the back of my hand”.

Sometimes this feels almost claustrophobic as he sings about wanting to be part of her furniture on ‘I Wanna Live in Your Bedroom’ but generally the music is able to breathe and tell his side of the story of this time in his life. ‘Hallelujah, Love is Real’ and ‘Easy Does It’ feel like they could be relatives of Phosphorescent songs with their backing vocals and gospel influences to express Ramirez’s feelings when he first met his girlfriend proclaiming “I saw that light at the end of the tunnel, I stood upright and I’m never gonna stumble” on ‘Hallelujah, Love is Real’. ‘Heaven’ could have been written by The Killers on one of their better days. ‘Prevail’ the final song which is bass and synth-heavy veers into sounding like trip-hop and ends the album with the song bleeding out into a hiss.

Ramirez’s loss is our gain as he has produced an emotional tribute to love and loss using collaboration with others to heal his heartbreak and come out feeling okay. He is not wallowing in his sadness but has turned his experience into something positive. Despite his break up Ramirez is able to sing on ‘Shine on Me’- “I wasn’t born with a smile but I’ll die with a grin”.

Ramirez collaborates, bringing optimism to his songs of love and loss