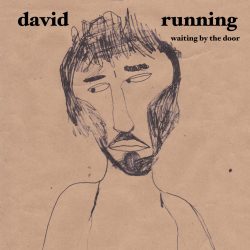 This Quebecois utilises a small band, but otherwise David Running is very much a lone operator. He sings, plays multiple instruments, wrote the songs, produced the album, self-released it and is his own publicist. In fact he says “It’s either really good, or I’m really deluded. Please advise.” Well Mr Running hasn’t been duping himself, these tracks are an interesting mix and an engaging listen. These are songs of reflection, of a life long lived.  Wistful, melancholic and sometimes just sad, he sings of nature, of travel, of relationships past.

The album cover is not a self-portrait – though as he is also a visual artist it’s the one thing he hasn’t contributed that he could – but it’s a primitive pencil drawing of a pensive head, assumedly a younger family member’s vision of him. David Running – presumably his given name rather than an obscure Old Testament reference – arranges each track differently. So, opener ‘Down the Saint-Laurent’ is raw, laden with percussive banjo, leading into drone violin, but then ‘Looking for the Sun’ is gently fingerpicked with soft backing vocals. ‘No More Songs’ leads with cornet into  Cohenesque desolation and ‘From the Sidelines’ has brighter Byrdsian chimes, whilst ‘Maybe ‘78’ rails like Tom Waits. The tracks then tend to be progressively dolorous until ‘You Didn’t Hear’ moves past sombre to destroyed, whilst the album finishes with the more optimistic Dylan styles of ‘Swallow the Sun’.

This is not a commercial product. Generally unclassifiable, when his first album was released in 1991 he would have been classed as nu-folk or primitive? He himself now offers Canadiana/folk as genre options. It is a decidedly eclectic sound, but of a certain mood, gaunt, unconventional, campfire in places, but full of musicianship and laden with poetry. These tracks will not be thrown at you on any digital playlists, so make the effort to seek them out on Bandcamp or Soundcloud. Perhaps make a contribution: there is a lot to like. David Running is not deluded.