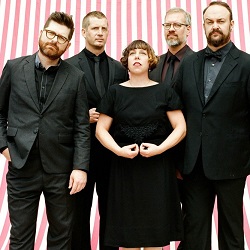 Rejoice, rejoice, rejoice ! This November will see the long awaited return to these hallowed shores of, arguably, the greatest band in the world currently touring.  A strong claim, but one which you don’t really want to disagree with – we’re more than happy to argue the point.  Endlessly.  And anyway, why argue ?  Isn’t it enough to know that in a few mere months the streets of our fine cities will echo to the clipping blakey studded heels of Jenny Conlee, Nate Query, John Moen, Chris Funk and Colin Meloy?  Not enough ?  Ok well the cherry on this particular iced Bath bun is that The Decemberists are also releasing a new album – ‘I’ll be your girl’ – on the 16th of this very month, the cover of which strongly suggests that as a collective The Decemberists have been hitting the recreational substances hard.

New album, new sound, the forever restless tale of the musical journey of The Decemberists.  Still, to many, the personification of a folk-rock-Americana band, the Decemberists have along the way embraced college rock and folk-prog as well as European folk and sea shanties.   ‘I’ll be your girl’  adds more electronic sounds, but at its heart it’s still The Decemberists.  There’s a taster in the form of ‘Severed’.