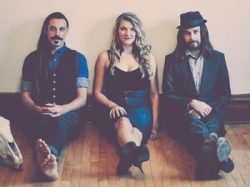 Spanning a wide range of genres, from Beatles-esque pop songs, traditional Canadiana folk, Albertan country and Paridian aires to a full-on spiritual music backed by a star-studded choir, the three collaborative yet distinct writers in Red Moon Road frame immaculately crafted songs with original and innovative instrumental work.  Their new album ‘Sorrows and Glories’ is out on October 16th in the UK.

Tell us about yourselves and what you do?

3 Canadian 30 somethings who have been making music together for over 5 years.  2 Daniels and a Sheena.  We crisscrossed the great country of Canada 7 or 8 times before branching out and have now seen 7 other countries in the course of our travels.  We have three releases.  We all write.  We all tell stories through music and in our live show. We all sing and we all still like each other after an amazing journey so far.

How did you get together/start out?

Winnipeg is a close knot hot bed of prolific and talented musicians.  It was only a matter of time before we crossed paths.  Daniel and Daniel we’re both looking to expand out of our previous lives as drummers (one in a French metal band, the other studying jazz at university) and recognized a multi-instrumentalist partner in each other.   Sheena was studying opera at the same university and singing in funk bands at night and we both agreed she was our dream vocalist.  We were in the studio together a couple months later and haven’t looked back.

What is your current release/future release?

A new full-length release entitled “Sorrows and Glories”.  Arguably our best and most diverse album yet.

What is the best part of being in a band?

The people an experiences we get to have travelling.  Music brings amazing people together and we have so many new friends as a result of our travels.  We also feel so lucky to have two best friends each in each other and making music with people you respect as much as we do each other is a drea,

What is your most significant moment yet?

Wow.  Thats a hard one.  Maybe landing in London for the first time and playing on an entirely new continent?  Maybe playing our home town festival, a gigantic 3 day event called the Winnipeg Folk Festival for thousands of home town fans.

What are your biggest musical influences?

We all come from pretty disparate backgrounds: DPH grew up studying classic piano and play drums in a french Canadian metal band, Sheena sang gospel as a kid in church and studied opera at university, Daniel J grew up listening to the Beatles and studied jazz.  What we’re doing in a “folk” band is beyond us…

What venue/gig do you most want to play?

There’s a fantastic auditorium in Winnipeg called the Burton Cummings Theatre that holds a certain prestige in our minds – playing in such a beautiful and ornate setting would be a real privilege. That said, we’ve also got our sights set on playing the Orkney Island Music Festival, as DJ’s heritage stems from those northern isles. Also, playing anywhere in Iceland would be amazing – a gig on an active volcano in the middle of the stormy north Atlantic?! Yes please! Honestly, any gig where people are there to listen to music is an honour.  But we have a special love of the festival vibe and would love to play some of the amazing Folk Festivals in the UK and Europe.

What is your best/favourite song you have written?

That’s totally like picking a child… so clearly we’re going with the baby.  The new album is full of stuff we’re very proud of, but the accapella song “Beauty in These Broken Bones” is a bit of a stand out, mainly because it’s so different and really features Sheena’s vocal ability.  Its not a song we do live all that often because it kinda needs a choir, but it’s also a lot of fun when we’ve gotten the audience involved in the past.

What is your favourite album of this year?

What does the next six months have in store for you?

We are so incredibly excited to be returning to the U.K.  We had such a great first trip over last spring and we can’t wait to return, especially having worked out some of the challenges like, energy convertors (to avoid blowing up amps), which side to drive on (to avoid blowing up the car), and how good the ale is, even though its flat and room temperature (but we don’t blow up as much).

Where do you see yourself in ten years?

Hopefully still making music together.  We are so proud of what we have accomplished but feel that our best work is still ahead of us.  We feel so blessed to have seen the world and met so many great people along the way, I hope that part never changes.

What is the best thing about Americana-UK?

That you have the Stray Birds (and so many other) amazing musicians right there on the home page, and now you’ll have us!