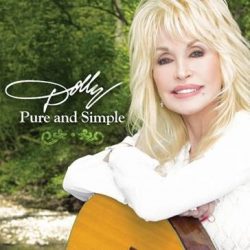 The undisputed Queen of ‘Big Hat’ country music, now deemed cool having worked with Jack White has 42 studio albums to her name, and with this record her first No.1 in 25 years.  She is so famous and well known that she has become mono nominture; like Pele or Freud, this record is no change to the Dolly formula and is no change to what she’s done the best in that 25 years.

Polite, good mannered, clean, wholesome, her voice is as wonderful as always, no change there, having been reinvigorated in the UK with that performance at Glastonbury in 2014 (in many people’s eyes at least), featured here on a second disc, she can often appear as a pastiche of herself.  Dolly is no longer just the preserve of the pensioner or gay discos, she’s back and proof to the adage if you hang around long enough you’ll come back in style.

Her Smokey mountain roots and time spent with Porter Waggoner are still evident here and this is a straight down the line country as you’ll find.  As you’d expect the production and musicianship are exemplary.  Dolly, unlike a lot of her similar contemporaries’ long time ignored by those preferring the ‘cooler’ Alt country tag, is interesting that she still demands column inches and transcends the genres and is embraced by Americana hipsters – a true musical superstar.

It’s an album that is something of a time warp, not a surprise her formula has served her so well, why change it.  At her best when the roots, her old time music education are exposed, or conversely embraces the modern, she’s a great voice for rocking!  This is what is often referred to a little disparagingly as a Tesco record, bought by those that don’t dig music that deeply, but it is a hit record, and we’d all take that.  Sometimes the overtly religious themes can be a little jarring to UK ears.  ‘Outside Your Door’ starts by her saying “Darling” and even the stony hearted will be charmed, is it a record that will change people’s opinions of Dolly – doubtful, but it is a good Dolly record, and of course her standard is one above everybody else, Pure & Simple.

42 albums in Dolly shows no sign of going quietly.