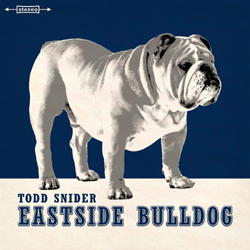 Apparently, Todd Snider has a doppelgänger, an East Nashville musical hooligan who goes by the name of Elmo Buzz and who has three rules on playing music. 1. “Play the bones of some Fifties or Sixties-sounding thing and make it just barely original enough to start a song.”2. “Only sing about fighting, fucking, getting fucked up, kickass cars, East Nashville or Bocephus — all other songs are stupid.” 3. “When in doubt, yell, ‘baby,’ and see what happens.”

Never seen together in the same room Snider and Buzz have a kind of love/hate relationship going on which has culminated in Buzz hijacking a Snider recording session the results of which are to be heard here. If you like dumbass rock’n’roll with a kick then you’ll love this. It’s low down and dirty with farting saxes and fuzzy Farfisa and even some wonky garage band guitar solos from Snider.  Stolen riffs from classic songs such as Riot In Cell Block No. 9 and Money abound and just about the only respectable aspect of the disc is that it honours a classic playing time of just under 26 minutes for ten songs, just like in the good old days.

Of course, this is all just the latest wheeze from Snider, a great excuse to wig out and play some bonkers music. Fortunately it’s a joke we can all join in on as Snider hits all the right buttons as he revisits the worlds of Sam The Sham, The Farmers and The Kingsmen. It’s great fun and a perfect party record.