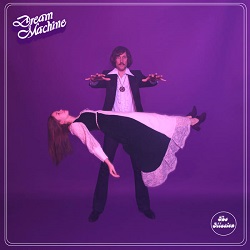 Having wound up his band Warm Soda, going out with an excellent final album, Matthew Melton returns with his new band Dream Machine. Gone are the power pop leanings of Warm Soda and in comes a late sixties “heavy” band, which, not unlike H.P.Lovecraft, mixes swoops of electric organ and a garage rock feel but then also adds in the not-part-of-the-summer-of-love attitude of early Black Sabbath. Buried Alive unfolds like an American International Pictures movie – perhaps loosely based on an Edgar Allen Poe story but mostly a vehicle for getting Jack Nicholson into a premature grave. It’s a metaphor for the pressures from the conventions of life as well, of course, that was never in doubt. Melton’s vocals add a suitably paranoid edge to songs such as the title track which whirls chaotically through doubt and deceit, whilst his wife, Doris, sets fire to songs of frustrated and rebellious youth like Torn from the hands of another “eighteen years I’ve found / yeah and it’s dragging me down / Torn from the hands of another” and the gloriously gloom infested All for a Chance.

The album is run through with wild and muscular guitar, helping to make it a buzzing, squirming, unstoppable psychedelic rock behemoth. It’s the sound of the sun rising on a new day after a night of some wild and gleeful abandon – “I wanna find myself in you / I gonna take back what I feel inside / I want to lose my place in time” Matthew Melton sings as stabs of Doorsesque organ add heavy punctuation behind his vocal. As an album The Illusion is a pure sonic joy, with too much commitment to feel either cynically indulgent or ironic.  Dream Machine mean it when they sing it.  The Illusion is fizzing with ideas like the proverbial box of firecrackers. Warm Soda may be dead, but long live the Dream Machine.

The Meltons triumphantly return with a new band and a new sound. It’s wild and groovy – and you can dig it.