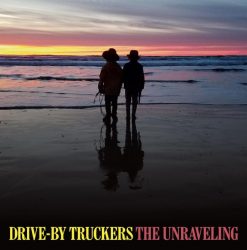 ‘The Unravelling’, the 12th studio release by Drive-By Truckers pulls no punches, let us be upfront about that. As such it may well divide opinion as much and the increasingly bifurcated world on which it provides caustic comment. Musically it could make many friends. Some songs roll on a riffing piano superstructure that supports Mike Cooley’s and Patterson Hood’s instinctually complimentary guitar playing, others escalate the meter to full out rock and there is judicious use of acoustic guitar and strings.  The musical canvas on which the Drive-By Trucks paint their exhaustive observations of their homeland is first class. The usual band signature is evident – southern rock infused with country and filtered through Replacements-like brio.

It’s the politics that give this album its urgency, but also what may divide opinion. Four years ago the ‘American Band’ release chartered disbelief at what was happening across the US; that was just the start, what we have now is indeed ‘The Unravelling’. A scan of the titles should prepare the listener – ‘Babies in Cages’; ‘Heroin Again’; ‘Armageddon’s Back in Town’ anyone? The album artwork depicts two shadowy figures, children, dressed in what seems to be pioneers outfits looking out across the ocean, perhaps at what might have been or maybe towards another place where we can start again. Inside the cover the album charts the here and now – and it ain’t pretty. The sleeve note explain – “Dualities have always been an obsession of mine and to some extent the band itself. Being born a liberal in Alabama probably lends itself to that”. The past eleven albums have toyed with that to a great or lesser extent, the contradictions of the music, location, ideals and outlooks. It is, they argued, hard to be a liberal in Alabama. On ‘The Unravelling’ they expand on that, it is now harder to be a liberal anywhere. ‘American Band’ might have been a commentary on the US, but this album is for everyone, for every place and everyone that was certain it ‘can’t happen here’ because their institutions were pretty rock steady, only to have suddenly woken up asking ‘what the hell happened?’

And yet, there is a humanity and sympathy in these songs too. ‘The Unravelling’ might rip apart the pyschosocial milieu that moulds these extraordinary times but it tries to pick its target. So the real people are not the amorphous mass that propelled these times, rather they are still victims. In ‘21st Century USA’ it is still a place where there are ‘Folks working hard for shrinking pay’ and “ You look at your children and you hope and pray that they can conjure up a better day/ No one remembers how it got that way/ 21st Century USA”.  The targets are obvious, there is little subtlety in ‘Babies in Cages’ where “The world wakes up this morning/ I’m sorry for the news/ Wrapped up in a tinfoil blanket without any shoes/Babies in Cages”  and “[T]here’s just outside forces turning them against him/ a conspiracy to water down his blood/ and its all the fault of it or them or they/ give a boy a target for his grievance/ and he might get it in his head that they need to pay” (‘Grievance Merchants’). Wow – ‘The Unravelling’ is not a warning,  that time has passed, it is now time to bear witness. ‘The Unravelling’ is a concentration of themes occurring across many recent releases ‘Thoughts and Prayers’ shares its title with a song on Will Hoges’ excellent 2019 release ‘My American Dream’ (20 years from now there will be a book written by a sociology professor analysing how these time where chronicled in music) where tragedies are an almost daily occurrence met not with action but are deflected with banal platitudes.

‘The Unravelling’ is a rock record, its music is hugely enjoyable but don’t expect good time rock and roll. Does it leave any room for hope? Yes, but there is a lot to do,  The final brooding song ‘Awaiting Resurrection’ notes that “In the end we’re just standing/ Watching Greatness Fade/ Into Darkness…..Awaiting Resurrection”.

These Truckers do not Drive-By: they are making a stand, and we should be grateful.

Back with a bang and telling it like it is, fantastic new album by premier league Americana band