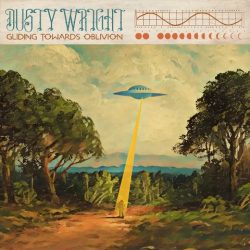 The artist here – Dusty Wright – describes himself as a singer songwriter, pop culture creator and metaphysical cowboy who is based in New York City. Dusty Wright has indeed been in the business for some time and has experience as a presenter and musical adviser as well as being an artist in his own right.

This particular album is billed as the third instalment in a trilogy of metaphysical ruminations about life, death and love which started back in 2011. The ten tracks were written by Dusty Wright who has also produced the record and they are all pretty good songs of the soft rock variety.

The title track and opener is the most thoughtful and acoustic of the set and is catchy enough to get into your head after a few listens. However, the artist’s voice is really not that strong and stripped of much of the accompanying instrumentation this is all too clear. Things are better where instrumentation is involved and in this respect there are some really good musical vignettes such as a Spanish-style guitar and rhythm on ‘Silence of the Knowing’ and a mesmerising backing loop in ‘Rhythm Of Dreams’ and also ‘Cicada’ which closes the album. ‘I Wander’ is also worth a mention as a particularly upbeat pop style track where the musing of “I wonder as I wander” is cleverly interplayed. In all, it is a pleasant piece of pop music but it fails to particularly inspire and it’s hard to discover where the deep resonating questions which the artist clearly hopes you will find lie.

Soft rock and pop tunes from self styled metaphysical cowboy