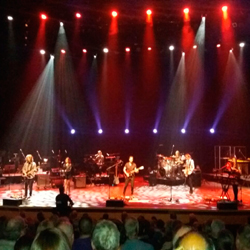 Dweezil Zappa could just be the finest current example of a chip off the old block in the world of rock and jazz. Not that there’s anything wrong in the slightest with tribute bands, but Dweezil playing his Dad’s inventive music is in a different class entirely. He seems almost to channel Frank’s guitar and yet also has a style all his own, albeit one that draws on and takes inspiration from his musical heritage. ‬

‪And so it was an immense pleasure to be invited to the Royal Festival Hall on 10th of October to see the band for the London leg of their latest tour, “Dweezil Plays Whatever the Frank He Wants – the Cease and Desist” tour. Dweezil’s last London show at the Roundhouse was  pretty amazing, so a night at the Royal Festival Hall came with high expectations.‬

‪Any lingering doubts about whether a similar standard would be maintained after such a hiatus were almost immediately assauged. If anything, in the last five years the band has developed musically into an even tighter and more deeply interesting ensemble. Particularly notable is the musical relationship between Dweezil and keyboard and woodwind virtuoso, the hugely talented Scheila Gonzalez, which forms the core in the band’s playing, lending perhaps a confidence to newer band members. ‬

‪After a short, but endearing, introduction from actor Martin Clunes, the gig kicks off with another pleasant surprise – the Norwegian Wind Ensemble – joining the band on many pieces to provide woodwind and brass backing, and promising an evening of very full musical sound. If at some venues, the sheer number of distinctive musical instruments playing at once could present an almost insuperable challenge, it doesn’t prove a problem at the Royal Festival Hall with its excellent acoustics.‬

‪The first part of the first half performance draws heavily on early Frank Zappa work in the Mothers of Invention. During songs like ‘It Can’t Happen Here’ and ‘Cruising for Burgers,’ you’re really reminded of just how much there is in this music. Time signature and tempo changes vie with variations in playing styles and the different textures afforded by such a range of instruments contributes to the overall sound, although it’s in the latter song that the guitars first really begin to let rip.

As the set continues, the audience are treated to such delights as ‘I am the Slime’ and, after a fun rendition of the Bond film’s theme, a rare performance of ‘Rollo’ – only available during Frank’s time on bootleg records. The rhythmic, melodic, and harmonic textures on offer for the listener here are truly stunning. And all the while, Dweezil and everyone just look so happy to be playing. That’s what really makes this band so likeable! For add emphasis, around about this time Dweezil has noticed a youngster in the audience and calls him up on stage. What could have proven something of a cheesy moment if handled wrongly, works beautifully tonight. Although young ‘Milo’ says he can’t play any instruments, he’s assured that he can and soon finds himself with Dweezil’s beautiful SG around his neck, and while Dweezil fingers the chords, he gets to knock out some powerful electric sounds as the band continue with their jazzy arrangement. It’s a great moment and something that helps build an even stronger relationship with the audience.‬

‪Just before an intermission, the band play ‘Advance Romance.’ In this version there’s some utterly glittering slide guitar work from Adam Minkoff. He also provides some spectacular guitar and vocal work throughout the entire show, especially in his vocal interplay with lead vocalist, the delightful and talented Cian Coey. ‬

‪After a short break it’s the second half in this long and varied show. Again, there are some sublime highlights. The sheer energy of Cian Coey is remarkable, not only vocally but also with her dancing and strutting in skyscraper high heels. It’s during the fabulous ‘Zomby Woof’ that she performs a couple of staggering on the spot really quickly exaggerated bunny hops, or it could have been during ‘What Kind of Girl Do We Think We Are.’ Either way, it’s quite a feat and adds such a dynamic to the performance. Keyboard player Chris Norton gets his own ugliest version ever of ‘Happy Birthday’ in celebration of his ‘special’ day. A fine young duo – Ida Mae – are invited on for ’Cosmic Debris’ and look as though they thoroughly enjoy the opportunity to play in such august company. It also reflects the healthy lack of egotism within the band and its commitment instead to continued musical development. ‬

‪It’s impossible to sign off without mentioning the truly awesome ‘Inca Roads.’ This really is one of the most amazing Zappa arrangements and represents a fusion of rock and jazz at its very best. Dweezil and the band do it full justice, with Scheila Gonzales’s flute solo proving a dream and Dweezil’s soaring extended solo proving to be the highlight of the whole show. Whilst his – and the band’s – playing is inspiring and uplifting, what takes it to another level is how it fits and interacts with the band’s whole musical sound-field, capping what’s proven to be a truly memorable evening. ‬

(Thanks to Ian Shaw for assistance in writing this)