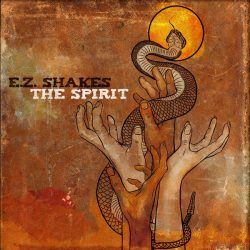 South Carolina’s EZ Shakes return with knowingly titled album number two, ‘The Spirit’. You can be forgiven for not being aware of their earlier work as they are only just beginning to find an audience beyond their generous home crowd. This record offers a real glimpse into the band’s earthy and somewhat intense heartland folk/country-cana world. It’s not an easily accessible introduction but just about repays the effort for those who make it through.

The band’s de-facto leader and songwriter is Zach Seibert (also vocals and guitar) who was given some good hippy Christian raising in the rock/punk/country filled bosom of small-town Illinois. His upbringing was anything but provincial though and his parents’ restless searching for a spiritual home for their unconventional values has left an indelible mark on his songwriting and the band’s brand of y’allternative music-making.

Whilst never overt or explicit, the regular appearance of religious references and imagery suggests that the ‘Spirit’ being addressed here emanates from scriptures rather than the bottom of a broken whiskey glass. Thankfully Seibert is never preachy or cajoling in his engagement with the issue, he seems confused and tentative rather than evangelical and appears to be using the process of writing and performing to work through some of this uncertainty. Siebert’s concerns may be better understood in the context of his past, working his way through a succession of local bands, gigging and occasionally releasing music that even he was, and remains largely unimpressed by; calling it “wishy-washy” and wondering if he had sabotaged it with his ‘dependency issues’.

Perhaps we should be grateful that artists are prepared to figure out this kind of stuff through their art and we might even feel privileged to be included in the process but it can get wearing if it’s not done with sensitivity and a very light touch and ‘Spirit’ verges close to that on occasion here. Too often Siebert makes his preoccupation with faith seem like a chore, an existential dilemma to which he exposes us, his audience, in a way that leaves little room for the joy or beneficence we might experience from someone like, say, The Sensational Barnes Brothers (their superlative) whose god-verse may be far more proselytising but also sounds way more fun, so us sceptics can excuse or even delight in it as well

What saves the record from being an overly earnest navel-gaze is a combination of Siebert’s tough as teak vocals and a sound that incorporates a psychedelic slow-burn into some pretty basic meat and potatoes country rock.  His voice is a coarse-grained, almost crude instrument; unpolished and homespun – in the best way imaginable and almost perfect for these atmospheric songs of personal exploration and redemption. When coupled with the luminous pedal steel of Todd T Hicks (who also produced), some spacey, swirling harmonies, the guitar shimmer of John Furr and Mitch Easter’s ‘Fidelitorium’ mix, ‘Spirit’ offers up an intriguing listen. It just never quite convinces, engages or entertains in a way that compels our repeated attention.