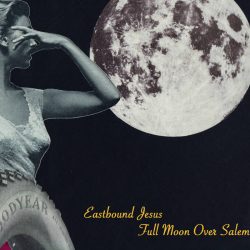 The 2011 debut album from sextet, Eastbound Jesus was optimistically entitled ‘Greatest Hits Vol 1’. Three studio albums and one live album later, whilst we have not yet been regaled with ‘Greatest Hits Vol 2’, the release of ‘Full Moon Over Salem’ should assuage any longing there might be out there for any such hits related compilation.

The band purvey their self- titled “Northern Rock” from the town of Greenwich situated in rural upstate New York. Their music is an earthy blend of bluegrass, county, rock and even a tinge of soul, showcasing band member Luke Anderson’s rhythmic / percussive banjo playing and other band members adding lap steel guitar and engaging harmonies.

We are introduced to Anderson’s deft plucking on the opening track, ‘Roll Back Down’ and there are plenty more twangy shenanigans to delight in as the album progresses. ‘Working Man’ is hard to resist; the whole attitude of the song gets captured in the insistent lead guitar riff whilst the lyrics tell us, “One thing’s for sure, no matter what your age is, you can’t judge a book without reading all the pages, can’t judge a man according to his wages”.

There is plenty of high spirited foot stomping here and some great stories as in ‘Jerry Dean Brando’ where the hero wants nothing more than to be buried with his banjo. There are also quieter, more reflective moments such as in the title track where the ending of a relationship and starting over is the theme. The band’s manager, Greg Bell is the subject of ‘Grapplin’ Greg’ who could well be a force to be reckoned with. ‘Cherokee County’ uses the Atlanta Olympics bombing to the table whilst, ‘Mean Old World’ brings a flavour of soul to the proceedings together with organ and brass section.

There is a lazy ease pervading, ‘Full Moon Over Salem’ that beguiles the listener in to engaging with each track as it is presented. The listener will experience music that can be taken at face value and will walk away with the delightful twang of the banjo ringing in their ears, whilst possibly keeping a watchful eye out for that second volume of greatest hits.