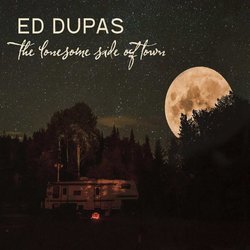 Ed Dupas’s third album truly merits the definition of a self-reflective LP. Across its eleven tracks you can clearly hear a more personal edge on ‘The Lonesome Side of Town’ with a slightly rockier take than perhaps is found in traditional Americana music. The record was written when Dupas was facing a time of personal isolation but unlike some albums it doesn’t completely wallow in self-pity but attempts to show some personal growth. Songs like ‘Just For Two’ takes a true acoustic sound to tell a love story within its lyrics,  describing a world where the only person that matters is the one you’re with. It is definitely one of the stronger songs on the album.

The track ‘State of Nation’ departs from the others on the album as an overtly rocky and political song, highlighting current negative events in the USA, referencing the gap between rich and poor and a feeling that things aren’t changing for a large section of the people.

The Michigan based singer-songwriter tries to take a soulful edge to Americana music and largely succeeds, but his rock style also shows through. Overall, it’s a well-rounded album with a couple of songs worth a second listen.