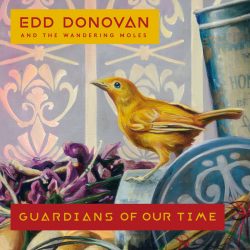 Edd Donovan’s third album finds him retracing his steps in some ways and moving with the times in other, more subtle areas. “The Singing Social Worker”, as he’s known on the folk scene due to his day job and songwriting style, has enjoyed a level of peer appreciation and media attention, without ever gaining the popularity that his work has perhaps merited. With ‘Guardians Of Our Times’, Donovan has decided to get back to basics after the extended band and big production of 2016’s ‘Making Mountains Vol 1’.

This is Donovan with his guitar and keyboard at home, along with Emma Parker in the songbird role on harmonies and Chris Cundy appearing on bass clarinet. It’s raw in the mood of his namesake, or early Dylan, and centres around the album artwork of New York painter Gigi Chen and her sweeping, colourful brushstrokes of the Bowerbird of the song. It’s all very bright, very organic but also meaningful in ways that perhaps only several repeated listens can reveal. For instance, the title track is described as “a rallying call, a celebratory protest song where “young hearts, young minds bring the revolution to life”. Of course, lyrics such as these sung over bare acoustic guitars and stripped back production will transport some listeners back to another movement in another decade, but life is swings and roundabouts, and perhaps now more than ever the world is in need of cultural champions to bring a sense of natural order to the changes all of us face going forward.