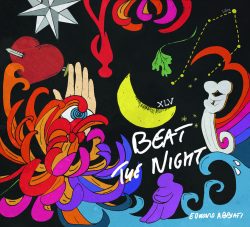 Edward Abbiati may not be a hugely familiar name to everyone but over the last 10 years this Hampshire born Anglo-Italian has been a significant contributor to the European scene as frontman for the prominent Italian Americana band Lowlands and now following the unfortunate breakup of the group, a career change as a solo artist beckons and Abbiati has released this rather fine debut album ‘Beat the Night’.

This is clearly a hugely personal album filled with very personal lyrics as ‘Beat The Night’ finds Abbiati reflecting on difficult times, including life-threatening illness and finding reassurance and comfort in new positives, such as the birth of a new daughter and Abbiati himself best sums up the raison d’être behind this release:“In a way I have always written about love and death, only this time I was not in the observer’s balcony but had to face the issue square on. The album is a journey in and out of darkness. Following whatever love and light I could find. We live, we grow and music helps along the way. I think this is my most personal and possibly best album. The amount of luck and love I have been granted is humbling. This record is hopefully a thank you note and a sorry note to whomever I hurt along the way.”

That’s the background but what’s the music like you may well be asking? Well, it’s consistently good throughout and on repeated plays the listener is able to unpick more of the meaning within the lyrics as Abbiati bares his soul and tracks like ‘45’ show both the darkness surrounding a midlife crisis as well the light that follows the revelation that all is not lost and the realisation that there is a route forward, while the next track ‘Sleepwalking’ continues in a similar revelatory vein.  Abbiati had gone through a very dry songwriting period and this album is the result of the emotional dam being opened as his feelings just seemingly poured out.

Don’t be fooled into thinking this is a dark depressing release though as it’s far from that. It’s an album that ultimately is about hope and the lyrics on the last track ‘I Can’t Tell Ya’ probably best illustrate this theme as some nicely subtle harmonica from Jimmy Ragazzon accompanies Abbiati’s solo acoustic guitar as he sings, “I believed in many ways this old blues would never leave / I lost my faith, the price I had to pay / But the sun came up on a winter’s morn, I turned my hurt into songs / I found my faith, the only way to keep going on”. An excellent sentiment to end any album!