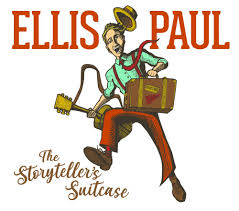 “I felt compelled to write about it. Three people dead – over what? A fucking statue.” Ellis Paul outlines in words that brook little ambiguity the drive behind his song ‘The Battle of Charlottesville’. The song is prompted by the tragic events of August 12th 2017 in his adopted home city, a white supremacist rally that left one protester dead, scores injured and a police helicopter crash that took the lives of two state troopers.  And herein lies something of the drive behind Ellis Paul’s life as a storytelling songwriter.

After nineteen albums Paul has started his own record label with a vow to write about the stuff that is important to him. Songs about the personal, about love and family but also, on a wider level, about community and his country. So it is that on ‘The Storyteller’s Suitcase’ there are songs that recall very specific memories and events in Paul’s life such as ‘Five Alarm Fire on the 4th of July’. So specific indeed that we have a date, 4th July 1979, when the family farmhouse burned down during what sounds like a very entertaining family reunion.

Other songs delve into the personal memory bank; the most beautiful thing he has ever seen in ‘Slingshot’, the title track that tries to sum up 30 years on the road, or the humbling and affecting conversation with his five-year-old daughter following the death of his father, ‘The Innocence and the Afterlife’.

Other songs such as ‘Scarecrow in a Corn Maze’ have a wider scope, in this case the story of a returning soldier with PTSD or ‘Election Day’ with its arrow straight to the heart of American politics, or maybe it is simply aimed squarely at one man in particular. Paul credits Michael K Brown for the gift of this song but its lyrics and sentiment are unmistakeably Paul’s. And then that Charlottesville song where an event of national significance is given a personal perspective from someone who lives there.

With this album Ellis Paul wanted to capture the intimacy of the likes of Cat Stevens or James Taylor and he has unquestionably done that. The devastating realisation that he now has Dupuytren’s Syndrome, a condition that folds the fingers shut and limits the ability to play the guitar or piano, lends ‘The Storyteller’s Suitcase’ a poignancy that adds another level of intimacy to an album already laden with it.

Storytelling singer songwriter mixes the personal with the politic