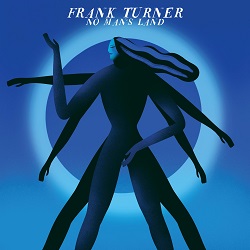 The title of Frank Turner’s eighth album is a bit of a pun as the thirteen songs it consists of all are stories of women. No men. Get it? On ‘No Man’s Land‘ Frank Turner sets out to tell the stories of remarkable women who have been written out of history, or are in danger of fading away. The combination of predominantly acoustic guitar and vocal driven songs – adorned with a little percussion and the occasional squeezed box – means that ‘No Man’s Land‘ is very much in a tradition of songwriting associated with the likes of Ralph McTell or Al Stewart. In keeping with the theme Frank Turner has also gathered a crack band of female musicians – there’s strings and piano from Anna Jenkins and Gill Sandell of Emily Barker’s Red Clay Halo band, Lock drummer Holly Madge, Paloma Faith’s bass player Andrea Goldsworthy, Kat Marsh of Choir Noir – all under the direction of producer Catherine Mark.

There are three strands to this historical analysis – women whose lives are so little known that their stories can be imagined and freely embellished, women who are actually pretty well known and have a number of facts already pinned to them, and thirdly there is a song about Frank Turner’s mother. Of these, it’s the first strand that best lends itself to song and that are most successfully sculpted into shape. Opener ‘Jenny Bingham’s Ghost‘ is one such, a fast paced folk-rock tale of an alleged witch from 17th Century Camden Town who had run a drinking house and had got through a number of husbands in a suspiciously quick order: “they swore upon the gravestones of her husbands she’d grown rich / the ribald and the righteous they knew she was a witch / but the reason she was hated was a simple one indeed / she had kindness for the careless she took in those in need.” It’s a high energy opener for the album, with a little nod to The Underworld, the pub that stands on the same site now which “still offers sanctuary for all broken boys and girls“.

There’s a spectral London tale on ‘The Graveyard of the Outcast Dead‘ which imagines a ghostly encounter on Christmas Eve between the shades of a prostitute buried in unhallowed ground and her lover who searches endlessly for her amongst a changed landscape: “the wasteland was claimed by the city / they covered it with tenement slums / but where we’d been left had never been blessed / and they dug down and built on our bones.” It’s a song that eschews gothic elements, sounding more like a gritty murder ballad before finally launching into an anthemic celebration of eternal love “so London don’t mourn for your lovers, raise a glass for us glorious dead.”

‘The Death of Dora Hand‘ starts as an upbeat campfire cowboy song in the tradition of ‘Jesse James‘, telling the life story in brief of an opera trained Boston singer who headed for a very different life in the expanding West. All seems well as she rises to fame as a vaudeville singer, but as the title hints there’s dark deeds to come as she’s shot by a drunken would-be suitor in a section which sees Frank Turner kick up the pace and the volume of the accompaniment to capture the rapid unravelling of violent events. The sweet and pure jazz of ‘Nica‘ makes for a nice change of pace although it’s a somewhat incongruous accompaniment foretelling of the be-bop jazz-obsessed Baroness Pannonica de Koenigswarter. Genre subdivisions, as we’re painfully aware, do matter.

Christa McAuliffe, surely the most well-known of the seven astronauts who died on the ill-fated Challenger shuttle’s tenth launch, is memorialized in ‘Silent Key‘. It’s a little disingenuous to even suggest that she has been written out of history, and ‘Silent Key‘ also plays somewhat fast and loose with the truth for dramatic effect, with factual errors that Al Stewart would never have allowed to slip into his historical songs. Perhaps worse is that about halfway through the song it becomes all about Frank Turner’s reaction to the tragedy and how it reflects on his own life and his own loves. Sorry, Frank, but weren’t we talking about Christa McAuliffe? Far better is the rocking ‘Sister Rosetta‘ which celebrates “the godmother of rock and roll / the original sister of soul / all our music was in her.”And although there’s a suggestion that in recent years she was at risk of fading away there’s fist-punching joy that she’s now in the Rock and Roll Hall of Fame.

The album closer ‘Rosemary Jane‘ is a bold song to include – it is about Frank’s mother and the hard times that she went through when he was a child. Portrayed as trapped in a loveless marriage –  “Rosemary Jane is the first out of bed every morning the same, but there’s mouths to be fed, with the money she gets from a man who is dead to himself and dead to everyone else” – there is, in addition, regret from Turner himself as he sings, “we haven’t forgotten the remarkable way that you took all that pain on your shoulders and put it away, Rosemary Jane / when I think of the things you had to endure, we were young we were careless headstrong and unsure“. This slow song, predominantly just acoustic guitar and vocal only, is  quite a touching tribute. So why bold? Well it also inevitably rips the scab off Frank Turner’s never healing wound – his relatively privileged background. The Old Etonian son of an Old Etonian, whose mother is a Bishop’s daughter, Frank Turner has vocally railed against those who hold this against him. Of course money and privilege doesn’t guarantee a happy marriage or a happy childhood – but listening to this song conjures images of a life of perpetual struggle which some might raise an eyebrow at. Unfair?  Well – just to reiterate, we didn’t bring the subject up first.

‘No Man’s Land‘ is an interesting listen for the more folk-rock inclined, and the occasional musical changes of pace such as on ‘Nica‘ and ‘The Hymn Of Kassiani‘ help to keep a freshness to the predominant sound. At his best when kicking up the pace, Frank Turner has nonetheless delivered a thoughtful album which also communicates his interests in historical biography.

Frank Turner suggests that we talk about Herstory, for a change