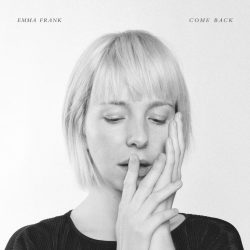 Being an ardent fan of (almost) all things Americana is fun, isn’t it? Highly talented artists, writing and playing wonderful creations, live on stage and on record, and all across an astonishingly wide spectrum of music genres. Everything anyone could possibly want is here….rock and country and roots and folk and on and on, even reaching the far boundaries of jazz. Which is tremendous news, as it is on this boundary that Emma Frank’s ‘Come Back’ is found.

Frank’s fourth album is truly a joy to listen to, beautifully constructed songs showcasing a smart songwriting talent and a vocal of pure silk. Based in Brooklyn, Frank has a sound that manages to seamlessly intertwine folk and jazz and as a consequence comparisons with Joni Mitchell or Rickie Lee Jones are inevitable. But at the same time this is a very contemporary album, equally comparable with younger acts such as Becca Stevens or Norah Jones.

The album’s production has an atmospherically perfect stripped back feel, opening with ‘I Thought’, simple guitar, drums, keys and strings, blended with Frank’s soulful vocal tone. A cover of Wilco’s ‘Either Way’ follows, crafted as all covers should be; it’s the same song. But different. The delightfully executed low key production continues throughout, allowing Frank’s vocal to dance across the neat piano of her collaborative partner, Aaron Parks. ‘Sometimes’ is a great example of how folk and jazz can meet and play in the same space, but it’s just too short and leaves the listener wanting more. The jazz tinges on the album allow for interesting key changes and vocal phrasing, while not straying into areas of avant garde jazz (phew!).

‘See You’ is almost R&B, great piano and beat, a cleverly constructed track, but Frank leaves the best til last….‘Before You Go Away’, ending the album back in the folk room, that vocal floating across guitar and strings; a cracking way to end this album.

‘Come Back’ is first and foremost a folk album and isn’t the longest of the year; longest track is 5:15 and the shortest 1:23. But with outstanding songs, musicianship, vocal and production it certainly is one of the best.

Folk and jazz meet in a very happy place