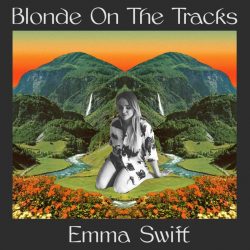 Dylan has been one of the most covered songwriters since the ‘60s. In fact, in 1965, Columbia Records ran a media campaign with the message “No one sings Dylan like Dylan”, as covers were outselling Dylan’s original versions.  While many artists have covered his songs,  few artists have recorded whole albums of them. Recently Maria Muldaur, with ‘Heart of Mine: Maria Muldaur Sings Love Songs of Bob Dylan’, and Betty LaVette with ‘Things Have Changed’ have both released complete albums of  Dylan songs and into this company steps Australian born East Nashville based singer-songwriter Emma Swift.

Originally, Swift recorded some Dylan songs with her friends, who just happen to be the cream of East Nashville studio musicians, to help her deal with her then depression in 2017. These friends include Thayer Serrano pedal steel guitar, Jon Estes bass, Jon Radford drums, current partner Robyn Hitchcock on guitar and Wilco’s Patrick Sansone in the producer’s chair. Her state of mind influenced the songs she chose to record, which has resulted in an album of Dylan covers that shines a light on some less covered songs. She finally completed the album during lockdown in 2020 by recording two additional songs. The lead single from the album is her cover of the very recent ‘I Contain Multitudes’ and she manages the difficult feat of not only making it her own but ensuring it fits seamlessly with the older Dylan songs.

Swift is a big fan of Sandy Denny, and her own voice can clearly demonstrate emotion. Her vocal ability, and the fact Swift and her backing musicians chose not to radically re-interrupt Dylan’s songs but simply allow their original strengths to shine through, mean that her versions stand up in their own right. While Nashville has a long history with Dylan, going back to him recording tracks for ‘Blonde On Blonde ’ there in 1966, this is not a country take on Dylan as Swift brings a plethora of influences to bear from folk, folk-rock, indie-folk and yes, country.

The second single ‘Queen Jane Approximately’, a highlight from ‘Highway 61 Revisited’, features Swift’s fragile vocals with a 12-string Rickenbacker guitar. ‘Simple Twist Of Fate’ is a highlight of ‘Blood On The Tracks’ and also of ‘Blonde On The Tracks’ with Swift’s vocals fully delivering the pathos and depth of feeling in the lyrics. It takes a singer who is confident in their own interpretive skills to tackle ‘Sad Eyed Lady Of The Lowlands’, Dylan’s rambling epic that filled the last side of the original double album ‘Blonde On Blonde’. Swift’s vocals carry her 12-minute take with an ethereal feel to the music.  The Band, and particularly the organ work of Garth Hudson, is echoed on the arrangement of ‘You’re A Big Girl Now’, which could be said to be one of Dylan’s saddest songs.

Bobcats and Dylanologists will be drawn to this album like moths to a flame, but it would be a pity if this was the only interest shown in ‘Blonde On The Tracks’. Emma Swift has a great voice, and more than that, as a songwriter herself, she knows how to interpret songs, and with Dylan you get some of the best songs ever written. Anyone who enjoys great songs with excellent vocals and supportive modern musical soundscapes, should give this album a listen. The album is being sold via ‘Bandcamp’ and is also available via Proper Records on CD and vinyl and is not available on the main streaming services.