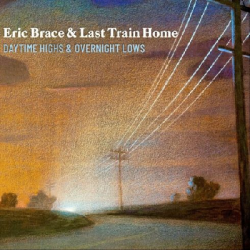 Last Train Home formed in Washington DC in the 1990s, releasing six well-received albums between 1997 and 2008. ‘Daytime Highs & Overnight Lows’ is their first release for 11 years. Having moved to Nashville in 2004 it became increasingly difficult for main man Eric Brace to keep the band active. During that intervening period Brace wrote and recorded with Nashville songwriters Peter Cooper and Thomm Jute. However, in 2019 Brace gathered members of Last Train Home together to make a new album and the result is impressive.

Known primarily as a roots-rock band, ‘Daytime Highs & Overnight Lows’ expands Last Train Home’s sound significantly, adding in elements of blues, soul, pop, country and bluegrass. Even this list is not exhaustive. At different points, evidence of influences such as The Band, Doug Sahm and the late period Monkees can all be detected. Brace blends his ingredients into a mixture of eight original new songs and a smattering of interesting and thoughtfully chosen covers. Album opener, ‘Sleepy Eyes’, is borrowed from Pennsylvania’s Frog Holler whilst one of the album’s highlights is ‘What Am I Gonna Do’, an unlikely Barry White cover.

Brace is the main contributor to the new songs, either as sole, or co-writer. The eclectic mix of sounds blending perfectly with his thoughtful, incisive and reflective words. Brace is also blessed with a clear natural voice which carries a reassuring warmth with it. A glimpse at some of the song titles – ‘Caney Fork’, ‘Floodplains’, ‘Hudson River’, ‘Old Railroads’, ‘Taking Trains’ might suggest an album of standard Americana fare. That couldn’t be further from the truth. ‘Daytime Truths & Overnight Lies’ is an excellent album full of rich sounds and great songs. Adding to the experience is Brace’s clear co-production with Jared Bartlett, which provides a warm pool in which the songs can swim freely, unencumbered by unnecessary adornment.

Out of the blue, Eric Brace and Last Train Home have conjured up an unexpected gem of a record. Don’t you just love it when that happens?