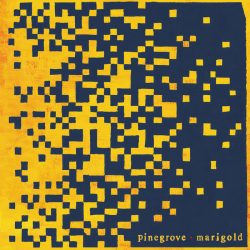 In 2017, Pinegrove founder and principle songwriter Evan Stephens Hall issued a statement saying that a woman with whom he’d had a brief relationship, had accused him of “sexual coercion”. The band’s ‘Skylight’ album was put on hold, the band took a break from touring and Evans underwent therapy. The alleged victim never made a formal or public complaint but the episode left a cloud hanging over the band.

‘Marigold’ is Pinegrove’s first album to have been recorded and released since those events. The first thing to say about it is that it is recognisably a Pinegrove record. However, in a number of ways it gently breaks new ground.  Commonly described as a mixture of indie-rock and alt-country, Pinegrove play literate songs, set to clever and varied arrangements. Hall’s conversational lyrics and clear singing style place the songs to the forefront. Already renowned for his honest and confessional lyrics, Hall’s latest songs, given the context, were always going to come in for close surveillance. That said, there are no clear references to the previously outlined events. The odd line here or there, could be examined, but anyone finding anything that might be construed as comment, is probably just looking too hard. ‘Marigold’ is not a confessional or cathartic album, but rather a line drawn and a moving on.

Taken solely on its musical merit ‘Marigold’ is a very good album,  arguably the band’s strongest yet.  Whilst they are capable of thumping out good indie anthems like opener ‘Dotted Line’, ‘Moment’ and the catchy pop of ‘Phase’, Pinegrove’s strength lies in the more narrative, acoustic and reflective songs. ‘Hairpin’, ‘Alcove’ and particularly ‘The Alarmist’ being the prime examples here.

Produced by Hall and guitarist Sam Skinner, the album has both depth and warmth . As well as Hall’s strong set of songs, his band’s ability to deliver them with a sophisticated simplicity, that makes that apparent oxymoron make complete sense, contributes hugely to a very impressive return. The album ends with the title track ‘Marigold’, which turns out to be a six-minute instrumental totally out of kilter with everything that comes before it. A slowly unravelling piece in which gentle notes trickle down over a humming electronic background, it is not easy to establish its purpose.  It would be equally valid to argue that this winding down provides the listener with time for reflection, or equally that it is totally superfluous.

Any appraisal of ‘Marigold’ is bound to be influenced by the accusations made against Hall. For some, his work will be tainted forevermore. Others might feel that having made public the accusation himself and having faced up to it through therapy, Hall is deserving of a fresh start. The record is more melancholy and more mature than its predecessors. It is certainly more accessible to the AUK reader than the band’s early releases. Whether the slight shift will appeal to the band’s established following remains to be seen. In a number of ways, this is a bold record and for the most part that boldness pays off.

Pinegrove move to a more mature sound on their fourth album