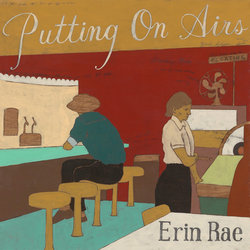 “Putting On Airs” is both a visually and musically arresting album. The painting which serves as the cover of the record is worthy of investigation in its own right. A seemingly forlorn looking waitress in a barroom stands in front of a jukebox while she has her back to a cowboy sitting on a bar stool, the separation between the two of them a matter of only a couple of feet, although the lack of any human engagement is indicative of a much wider gulf. There are also fragments of song titles from the album scrawled in miniature across the album cover and lyrics such as “let’s talk until there’s no more hard feelings” separate the painting’s male and female protagonists.

And it’s in her ability to explore the minutiae of human relationships that Erin Rae excels. Unlike a contemporary such as Courtney Marie Andrews who seems able to address both the personal and political (sometimes in the same song), Rae is able to navigate the personal with a capital ‘P’ just about as well as anyone working out of Nashville at present.

All the time there’s a focus on the personal, Rae’s still got a proper sense of perspective: “How small we are in the Grand Scheme; how great.” (“Grand Scheme”). There’s an intimacy at the heart of all these songs whatever the subject matter – the dreamy, desert island sounding title track proving a particular highlight – and they’re perfectly complemented by her band, particularly multi-instrumentalist Jerry Bernhardt.

Although this is only a sophomore effort, it’s close to being fully realised: romantic addiction, the tension at the heart of relationships, the desire we all seek at times for approval and validation – this is an album rich in songwriting and quality lyric writing, all the while accompanied by Rae’s angelic vocals.