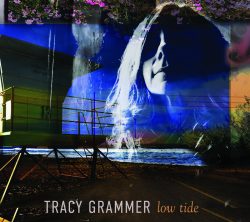 Grammer has been in the business some time and was part of a folk duo with Dave Carter in the 90’s until Carter’s death in 2002. She has released a number of albums since but this is her debut as a songwriter with all bar one of the ten tracks here being penned by Grammer. This is a departure from the folk sound of her early work demonstrated immediately by the opener Hole which is a driven pop track lamenting the singer’s failure in her love life followed by Mercy featuring a clear bass groove and electric guitar with a catchy recurring riff.

Grammer is also a storyteller with an acute eye with Forty-Niner describing the view of a casino security worker checking the faces and behaviour of the hopeful punters. Perhaps the best song here though is Good Life a song written in memory of her late father and sung from his perspective. It is touching and charming without in any way being sentimental and tells a great story about a man who lived a full and colourful life. The cover is of Kate Bush’s Cloudbusting and whilst it is OK it is far from being the best track here which goes a long way to demonstrate the prowess of Grammer’s songwriting skills. The album closes with Free an uplifting song about finding your feet in the world after many struggles. This work was crowd-funded but with the quality on show here surely a bigger label will come knocking soon.