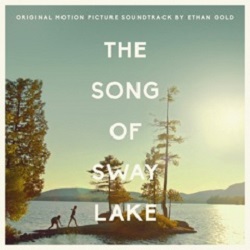 To be upfront about this, we don’t review a lot of film soundtrack albums – and that’s mostly because the music rarely impinges on our shared areas of interest here at Americana-UK. ‘Oh brother where art thou?‘ would be the highest profile exception to that rule. And in a further bout of honesty it’s really only the presence of John Grant (who also has a small part in the film), and The Staves, on this album which has piqued the curiosity. And, ok, a final admission – we haven’t seen the film and only have the synopsis to work on. In brief then, ‘The song of Sway Lake‘ is about an attempt, after his father’s death, by a grieving son to steal an ultra-rare 78rpm recording – the titular song – which had been presented, as a one-off pressing, to his parents on their wedding day.  Subsequently it would become a big band hit post-World War II.

Ethan Gold’s soundtrack is predominantly made up of short snippets of scene setting music, evoking images of reflection and grief, as well as misty waters and hidden subconscious depths. These are often the briefest snatches of music, with many tracks coming in under a minute in length – some would be great to hear as expanded versions as many times the music ends before the ear has really finished with it. One such is ‘Nikolai’s Row,’ which is a warm jazz piano rendition of the theme from the original song that really could do with another minute or two, it’s a lovely piece. The paired tracks ‘Guide Boat Daylight‘ and ‘Guide Boat Moonlight‘ contrast wonderfully – by day the lake is dreamlike in its beauty, but under moonlight it takes on an eerie gleam invoked by the echoey keyboards.

The music is also presented as demo versions – and the versions of the title song as a rhumba and as a guitar and piano swing piece both sung by Ethan Gold are the most interesting of these, although the stripped down jazz combo on ‘Small Combo‘ offers another interesting variant on the theme – this time as an instrumental. The forty seconds of the dramatic ‘Bittersweet Orchestra‘ would be really something if the piece was expanded and brought to a fuller conclusion. The final soundtrack versions and the demos are separated by ‘Issa Intermezzi (Issa El-Saieh)‘ a full length track of jazz-rhumba fusion hinting at a South American influence.

However, as alluded to before, it’s the two sung versions of that song that open the soundtrack that are the main reason for the casual listener to consider the album. John Grant demonstrates the upper range of his vocal sweep on the “home recorded wedding present gift” version of the song – a soft swing recording with powerful opening strings and a steady guitar beat throughout as Grant soars over it all. It’s a glorious pastiche of the era, and has an authentically rich feel. The subsequent version with The Staves adding the vocals authentically evokes the big band jazz era and has The Staves morphing into The Andrews Sisters.  Rooty-toot-toot: but do two songs (three if you count ‘Issa Intermezzi‘) make a strong enough argument to pick up this recording?  Probably not, and the score below in part reflects the fact that only big fans of the film are likely to want to regularly hear an hour or so made up of predominantly minute long jazz influenced atmospheric ambient piano tracks. It’s not that the music is poor – it’s just of a really niche interest.

Ethan Gold’s soundtrack music evokes the golden era of jazz, and the dark night of the soul.