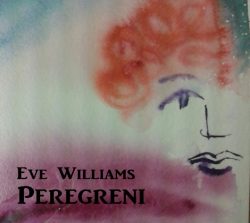 Eve Williams is a singer and songwriter from Northern Ireland with a distinctive voice and a wide range. She became a full time singer songwriter after developing a disability due to rheumatoid arthritis and being unable to continue in her then day job. With many plaudits she is plotting a path in the business with at least one previous album to her name. This CD comprises nine tracks and as the sleeve notes explain, the album title takes its name from a 5th century group of monks whose Latin name translates to “wanderers” a feeling with which the artist has an affinity.

Most artists look to start their CD with their strongest song but curiously in this case the opening track “Who Needs A Knight” is by far the weakest song here and out of sync with the mainly folksy and harmonic feel of the remaining tracks on this generally enjoyable CD. There are songs with hooks such as “Illumination” and others that are touching such as “Vale Of Angels” where Eve sings of days with her grandmother and “Ailsa Craig” a love song that name checks the small island of that name off the coast of Scotland.

This is nice quality stuff but the work is missing a few extra songs to make this into a fully rounded album which is certainly in the reach of this talented artist.