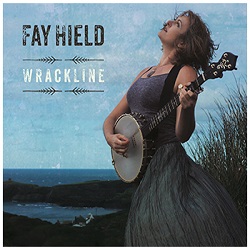 On her new release Fay Hield digs deep into folksong’s mystical world – the songs of spirits, usually malicious and malevolent, dark deeds and supernatural consequences. It’s a theme that is captured to perfection from the opening song ‘Hare Spell‘ which turns the magic of transmutation as recorded in Isobel Gowdie’s witch trial confessions of 1662 into a hauntingly rivetting song. With a directness free of shame or guilt Fay Hield sings of becoming various animals, with a confirming chorus “I go to the Devil in the Devil’s name / And stay ’til I come home again“. It’s the matter-of-factness that make it such an impressive song, there’s an air of “so what if I do?” to ‘Hare Spell‘ – a strong woman daring the listener to judge her.

It is the taking seriously of the traditional material, as well as the careful shaping of the new songs like the eerie ‘Night Journey‘ that fit so seamlessly that it’s difficult to discern which is the old and which is the new, that makes this collection so absorbing. Take ‘Old Grey Goose‘ – you may know it as ‘Go and Tell Aunt Rhody‘ – which is such a well known and simple skipping song that it’s one of the first or second tunes that virtually every “Learn to play today” instrument book contains. And yet in the hands of Fay Hield it becomes something quite other – a mournful and moving lament for things long wished for that are now lost.

The banjo and fiddle led ‘Jenny Wren‘ offers an unsettling view through the eyes of an abandoned lover singing to the birds in the trees: “there’s a baby in my belly / there’s an egg all in the nest /…/now he goes and walks right by me / they no longer sing for me.”  It’s a song that hints at a bleak outcome and folktales of birds capturing the souls of the dead as the little Jenny Wren is asked to act as a psychopomp: “If I die in grief tomorrow take my baby’s soul away.” There’s infanticide in the disturbed and disturbing ‘Cruel Mother‘, but here Fay Hield latches onto the strange twist of this song – having killed her children a mother then tenderly wishes to care for a pair of children she meets. They, of course, are the ghosts of her own murdered children. As tenderly sung on this album there’s rare empathy for the woman who, for no explored reason, has exhibited this extreme behaviour which is both strange and contrary. Taking different viewpoints is also a feature of ‘Swirling Eddies‘ which over a sparse accompaniment tells a Selkie story from the perspective of the sea dwelling shape shifting spirits who fear the terrors of the land but are lured siren-like by a good looking man on the shore.

Not all folk is weird – there’s much that is about love and drinking, or both – but when it comes to supernaturally weird the old cadences of folk music can catch that feeling in a way few other forms can manage. And when that catching is done so expertly as Fay Hield and her band – Rob Harbron , Sam Sweeney, Ben Nicholls and Ewan MacPherson, each folk names in their own rights – have done then the results are all the more effective.  ‘Wrackline’ is a real must hear.