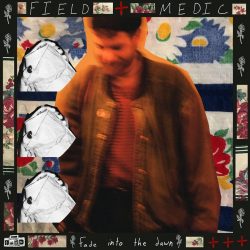 Field Medic, aka Kevin Patrick, clearly doesn’t give a damn. The wild hearted Californian casually screams how bad his life sucks and does it with class and a healthy does of black humour. This second release on Run For Cover Records revolves around the musician blues: feeling neglected by the audience, having no other home than the passing Taco Bell, and no other satisfaction than the post-gig shot of booze.

The record smells like an old tour van populated by a gang of folkies on the road for way too long, and feels like an eerie night driving to the next show. The opening song, ‘Used 2 Be A Romantic‘, sets the tone for the whole record. Patrick’s plaintive poetry glides along a simple and catchy instrumentation of acoustic guitar and ethereal electric guitars. The layers of keyboard, banjo and abundant use of subtle vocal harmonies on other tunes give the record an authentic melancholic vibe that instantly suggests memories of Vetiver when they were cool. The occasional use of eighties drum machine on a few numbers (‘Helps Me Forget‘, ‘Everyday’s 2more‘) is a pardonable mistake that, and thank god for this, does not overshadow the Field Medic’s raw musical sauce and could even be considered a good joke. Yes indeed, ‘Fade Into The Dawn‘ has that hint of irony that keeps it off the yet-another-prozac-fed-singer-songwriter-album stereotype, and still provides a good amount of bleak feelings and aerial soundscapes to satisfy the freak folk fanatic.